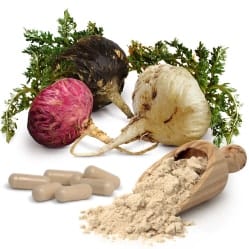 These are only a few of the reasons why we’ve chosen to add this highly beneficial ingredient to our most popular Keto Breakfast Smoothie as part of the 21-Day Cleanse and 30-Day Maintain via the 90-Day Balance program!

Sunfood offers several different types of Maca, including their unique blend Maca Extreme – a 4:1 concentrated form that is highly absorbable and easier to digest.

Maca is produced from the root of the Lepidium meyenii plant, a native to South America. Stories of ancient Incan warriors eating maca root before going into battle are easily believable, as this powerful root is now proven to enhance stamina, performance, and power. Maca root contains a high content of adaptogenic compounds, improving hormone balance, metabolism, libido, and more in both men and women. These roots are dried and crushed into a fine powder, which can be encapsulated or added to any number of foods and liquids for a healthy boost in overall well-being.

Where does Sunfood Maca Powder come from?

This powerful root originates in South American tribes such as the Incas, who consumed the raw tuber for sexual potency, power, and success in battle. According to archeological evidence, Incan tribes began domestically growing and cultivating maca root approximately 5,000  years ago in the Peruvian Andes. Many writings of early Spanish conquistadors even mention the root in treaties.

As with many natural supplements, maca grown at high elevation in its native habitat is the most potent. Our maca is the highest-altitude crop on Earth, produced at an altitude of 14,000 feet above sea level by the Quechua people in the Andes.

Over time, maca gained the nickname “Peruvian Ginseng” due to the enhanced cognitive and physical function after ingestion, though it is not a member of the ginseng family. Lepidium meyenii is a part of the cruciferous family, closely related to cabbage, turnips, and broccoli.. Because it is natively grown at high altitudes, maca is a fantastic superfood for those living in cold climates, in high altitude, or with physical lifestyles.

Additionally, maca contains higher lipid content than other root crops, giving the body a healthy dose of linolenic, oleic, and palmitic acids – the primary omega fatty acids needed to fight inflammation and support a healthy brain and heart. Maca is also rich in many trace minerals lacking in the modern diet:

All of the trace minerals and nutrients present in Maca allow it to support many body functions and organ systems. However, one of the primary uses for Maca seems to be reproductive and sexual  health and balance.

Men in ancient Inca communities often used Maca root as a method to enhance virility, and maca has even been shown to improve sperm mobility. Not only does it assist our reproductive systems, but it may also increase libido in both men and women, acting as a powerful aphrodisiac. Maca is a mood elevator and even promotes healthy menstruation and menopause.

As mentioned previously, many of the trace minerals present in maca may help with aging. Maca root is a potent source of antioxidants, boosting the immune system and promoting overall health for long life. The fatty acids in maca powder may help muscle and joint pain, while other trace minerals raise cell generation at the molecular level.

Both genders will benefit from increased resistance to sickness and enhanced cognitive and physical function, as well as increased mood and lessened anxiety or depression.

Maca has a pleasant, sweet taste, similar to that of butterscotch. It may be encapsulated, though to appreciate the flavor, you may choose to add it to water, juice, smoothies, puddings, salads, or any number of foods and tonics.

While no studies have shown a risk of overdose, because maca powder is so powerful it is suggested to start with small amounts and work your way up as your body adjusts to the potency. One to two teaspoons per day is recommended, regardless of the method taken.