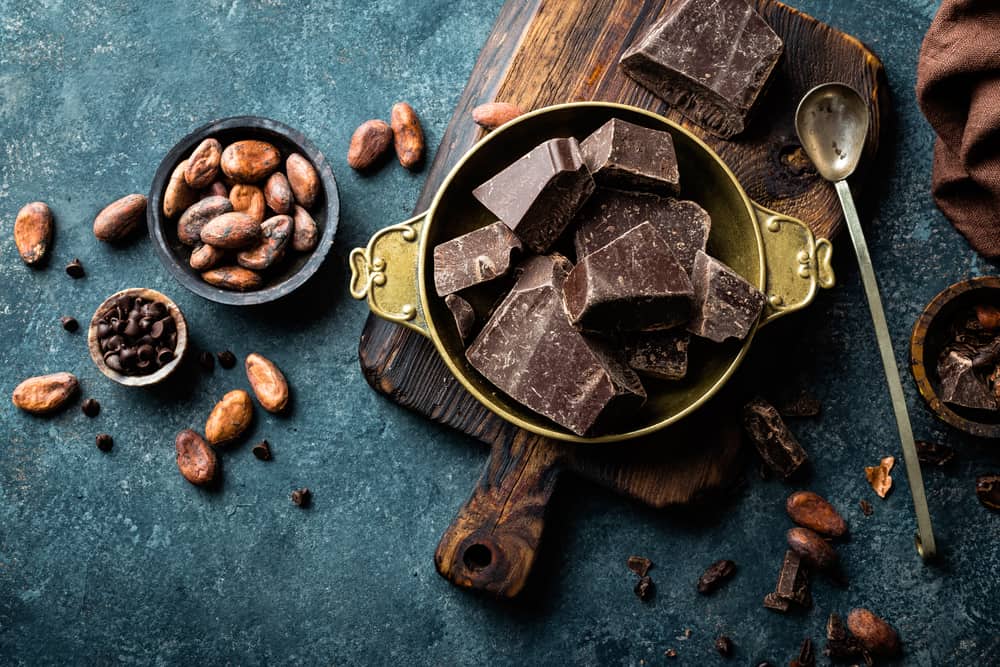 Cacao, also known as “Food of the Gods,” is an ancient superfood that has been revered for centuries by the Aztec and Maya cultures. Cacao is incredibly nutritious – it is one of the world’s most potent sources of antioxidants.

Cacao also contains theobromine – providing a slow release of energy throughout the day for non-jittery natural energy. It can also boost mood and happiness!

These are only a few of the reasons why we’ve chosen to add this highly beneficial ingredient to our most popular Keto Breakfast Smoothie as part of the 21-Day Cleanse and 30-Day Maintain via the 90-Day Balance program!

Cacao and cocoa can easily be confused when it comes to recipes. With similar origins and a very similar spelling, it can be difficult to know which is which. Even though these ingredients can be used interchangeably in some recipes, they are not the same product. They have different production methods, tastes and nutritional values.

There have been many studies that have promoted the health benefits of eating chocolate. People have been clamoring about the wonderful nutrition that chocolate provides. This sends many people to the store searching for their favorite chocolate bar for what they think is a “healthy” indulgence. While chocolate does have nutritional properties these studies are about the raw forms of the cacao plant, not the heavily processed form that comes in a chocolate bar. Below we’ll review the true differences between Cacao and Cocoa.

Chocolate ingredients or products come from the same cacao bean. What is done with the bean is what changes the ingredients and their nutritional values. These beans are picked from a cacao plant which is an evergreen tree. These trees are found in areas of West Africa and South America. Cacao beans grow in large bunches or pods, but they are not held in the leaves of the trees. Instead, they hang from the trunks.

Many find the appearance of the cacao pod surprising. There are few people that realize that their favorite chocolate bar once hung from a tree. These pods are very large and contain many beans. The beans are encased in a fatty pulp that can vary in color but is commonly white. The beans are a purple-brown color, but often lose their purple hue after being processed.

Down to the Details

Cacao and cocoa both come from the cacao plant, but that is where their similarities stop. Cacao is the raw, untouched state of the cacao plant. It is kept in its most natural form to preserve more taste and nutrients. Even though there is little processing that is done to cacao, it does come in a variety of forms to use with different recipes.

Cacao beans are whole, unprocessed beans removed from the pod and with the surrounding fruit stripped off. Cacao nibs are simply broken up pieces of cacao beans. Cacao powder is finely ground beans with the oil/fat removed.

This oil is what we call Cacao butter.Finally, cacao paste is created by slowly grinding nibs into a paste and letting form into chunks. All these minimally processed forms of Cacao remain as close to their natural state as possible, are full of nutrients and have a distinct bitter flavor.

It’s not until you begin using high heat and adding sugar, oils or milk fats that you arrive at a Cocoa product.

Cocoa is most typically found in powder form. Many people enjoy cocoa when mixed in with a beverage. To create cocoa high heat is used with the raw cacao plants, most often along with sugar. This level of heat changes the nutritional value that the plant holds and greatly decreases its benefits.

Many manufacturers try to market the benefits of cocoa powders. They advertise the benefits without emphasizing the added ingredients in the product, such as oils, sugars, or milk fat.

Cacao cannot cure or treat severe health problems, but some of the nutrients in the raw form are beneficial to the body. In its raw form, the plant has a lot of magnesium. A person should get a good amount of magnesium to have less of a risk of diabetes, help maintain a healthy blood pressure, have stronger bones, have a lessened risk of having cardiovascular problems, and maintain nervous system activity that is healthy.

There are so many health problems that can be deterred, with the help of other factors, by having enough magnesium in the body. While it will not reverse the effects of other health factors cacao can help provide the body with more magnesium.

There is a class of antioxidants that are called flavonoids. These antioxidants help to reduce inflammation throughout the body. The presence of flavonoids in the body has shown to help maintain levels of the “good” HDL cholesterol which can aid in better cardiovascular health. Both cacao and cocoa have flavonoids that can help in these areas.

There are nutrients in cacao and cocoa that are needed in our daily lives. Some of these are harder to meet without watching the diet closely. Iron is one dietary need that many people fall short on. Cacao offers a low value of iron which helps move oxygen into the body’s tissue. 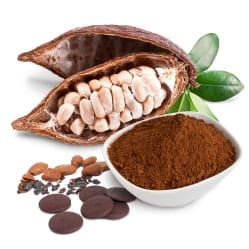 Chocolate for a Leaner, Longer Life

A little bit of chocolate has been linked to noteworthy health gains.

Chocolate offers unique slimming and longevity benefits, as well as antioxidants that can help prevent chronic disease—but it’s important to eat the “good” type and only in ideal amounts.

Studies point out that chocolate may not only make life sweet, but also help lengthen it. Chocolate isn’t a recent invention; its health benefits date back to ancient times, when the Aztecs made a chocolate drink from the cacao bean.

The antioxidant content of chocolate may explain some of its health-boosting potential. Phenols in cacao can inhibit free radicals and help build immunity. From having a potentially longer life to attaining a leaner body, chocolate may be both a smart and delicious natural intervention.

Chocolate as an Anti-Obesity Treat

A March 2021 study investigated how adding 10 grams of cocoa-rich chocolate every day to the diet of postmenopausal women would affect their body composition.

The six-month randomized trial divided the subjects into two: the intervention group, which received 10 grams (g) of 99 percent cocoa chocolate daily as part of their habitual diet, and the control group, which didn’t receive any cocoa. The quantity of chocolate received by the first group included 65.4 milligrams (mg) of polyphenols.

Measuring factors involving body composition, the cocoa was linked to a favorable decrease in the intervention group when it came to body fat mass and body fat percentage (as analyzed in the trunk, arms, and legs), with an insignificant reduction in body mass index.

The researchers wrote, “Daily addition of 10 g of cocoa-rich chocolate to the habitual diet of postmenopausal women reduces their body fat mass and body fat percentage without modifying their weight.”

In a separate study, cacao derivatives were analyzed in animal models for five weeks. The researchers found that the treatments significantly slashed body weight by 39 percent, systolic blood pressure by 27 percent, triglycerides by 55 percent, total cholesterol by 24 percent, low-density lipoprotein (LDL) by 37 percent, and the triglycerides/high-density lipoprotein (HDL) ratio by 54 percent. The cacao derivatives improved the metabolic function of the subjects without leading to secondary effects, the team noted.

Chocolate as a Heart-Healthy Food

Flavonols, which are plant-derived polyphenolic compounds in cocoa, have been linked to improved endothelial function and blood pressure in humans.

A March 2021 study explores the effect the consumption of cocoa flavonols has on stress-induced changes in humans’ vascular function.

The study recruited 30 healthy men to consume a cocoa beverage 1.5 hours before an eight-minute mental stress task, assessing forearm blood flow, blood pressure, and cardiovascular activity before and after, both at rest and during stress.

In the results, cocoa increased forearm blood flow at rest and during stress, with similar effects on stress-induced cardiovascular and blood pressure responses in both situations. Key to the outcomes are flavanols, which effectively counteract endothelial dysfunction and enhanced peripheral blood flow during stress, according to the authors.

But how much chocolate should lead to these benefits? A meta-analysis of 23 studies with 405,304 participants shows that reduced cardiovascular disease risk may occur with less than 100 g (about 3.5 ounces) of weekly consumption.

It’s important to note that larger amounts may negate the benefits and cause adverse effects associated with high sugar intake.

Chocolate as a Longevity Promoter

How about the relationship between eating chocolate and mortality? Research published in July 2021 examines this link in the U.S. population, studying 91,891 participants aged 55 to 74.

The researchers assessed the subjects’ chocolate consumption through a food frequency questionnaire. With an average follow-up of 13.5 years, they documented 19,586 all-cause deaths.

The lowest risk for dying from all-cause mortality was seen at a chocolate intake of 0.7 servings per week and from cardiovascular events at 0.6 servings a week. The benefits were more pronounced in subjects who never smoked compared to current or former smokers.

While the exact causes of aging are yet to be clearly understood, research suggests that telomeres are connected to the aging process. A study found a strong correlation between telomere shortening rate and the lifespan of species such as humans.

Interestingly, research published in 2020 found that adolescents who consumed two servings per week or more of chocolate candy have longer leukocyte telomere length compared with nonconsumers, possibly because of its effect on the apolipoprotein A1 (ApoA1)/HDL pathway.

In a 2008 study, cocoa also demonstrated antioxidant, pro-oxidative, and metal-chelating properties on the common fruit fly.

In choosing to use chocolate for its weight loss and longevity benefits, it’s important to consume the right kind.

Dark and Raw: The darker, the better, as this means less sugar is added in the mix. Go for at least 70 percent cacao content, favoring raw cacao because more flavanols are preserved.

Organic: This helps you avoid residues of the herbicide glyphosate and other pesticides used in conventional farming.

Fair Trade: Cacao crops are often unfairly traded and are even associated with the use of child slaves.

Read more scientific studies on the benefits of cocoa or chocolate and how this celebrated health food, in the right amounts and form, may serve as a sweet strategy against disease and premature death at GreenMedInfo.com.