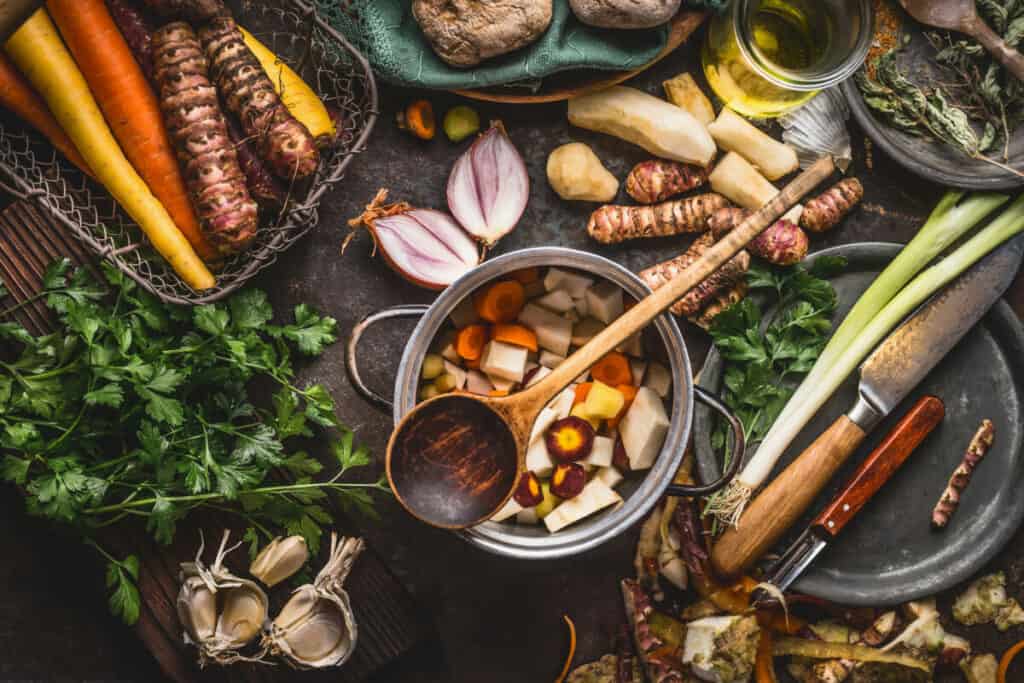 How to Heal Your Gut Naturally

The gastrointestinal (GI) tract of a healthy mammal is home to a complex community of bacteria. This microbial community is often called “microbiota,” “gut flora,” or “beneficial bacteria.” These microbes have evolved with us to coexist in a mutually beneficial relationship.

An Introduction to Gut Microbes

We need beneficial gut microbes for proper B vitamin production, digestion, and assimilation. Some bacteria also synthesize vitamin K. In fact, we need bacteria for synthesization, digestion, and assimilation of many vitamins, minerals, proteins, fats, and many other nutrients. Healthy bacteria also keep the population of other microbes (like candida) down to healthy levels. Healthy bacteria colonies form a biofilm that keeps the intestinal wall healthy and acts as a barrier against pathogens. Healthy bacteria move slowly and crowd out unwanted pathogens. A healthy gut biofilm is a home to thousands of different beneficial bacteria, the more the better. And they don’t just reside on our gut. Some of them can and do pass through the gut wall and they live all over our body. It’s often said that bacteria in our body outnumber our own cells by about ten to one. That’s incorrect, but there are more bacteria cells than human cells in the human body. The ratio is about 39 bacterial cells to every 30 human cells.

If you have ever been to a bio-dentist, they may have shown you what your mouth bacteria looks like under a microscope. Generally, the fast-moving bacteria are up to no good. You can see these guys frantically swimming around looking for trouble, banging against the teeth and gums, maybe looking for a good spot to burrow in and make a home, feed, and reproduce. If you have teeth and gum issues try this: take the capsule of a probiotic, break it open, and empty the contents into your mouth. Leave it in there. Move it around. Swish it around when you’ve built up some saliva. You should notice that some of the pain subsides. Now picture how this works in your gut. Incidentally, oral health is a very good indicator of gut health.

Without enough healthy bacteria, the whole body suffers. Gut microbes can change brain chemistry and alter endocrine functionality. Depression is tied to irritable bowel syndrome. Autism is believed to be caused by or at least exacerbated by an unbalanced gut. In my experience, every single autoimmune disease resides in the body of someone with an unhealthy gut.

Hopefully, you’re getting an idea of how important healthy bacteria are to our health. We need them for good health for many reasons, and likely most of which we aren’t even yet aware of yet.

It should be noted that the phrases “good bacteria” and “bad bacteria” are pretty inaccurate. Bacteria are only responding to their environment. “Good” bacteria, under bad circumstances, will become “bad” bacteria very quickly.

We all have candida spores in our gut even if we’re healthy. They’re practically indestructible. Anything we could do to kill them would probably kill us. They can reside in the body dormant without causing problems for an estimated six months.

Antibiotics kill bacteria and antibiotics can also kill other pathogens including fungi. But yeast spores are left to rule. When there is an opportunity to flourish candida turns fungal, becoming pathogenic.

An often overlooked way that candida gets fed is damage to the body. Cells are mostly made up of glycogen and starch. Damaged, dying cells feed yeast and other pathogens.

The gut is permeable, so to some extent, it’s always leaky. A health gut biofilm doesn’t let unwanted things pass into the bloodstream. Some of the “good” bacteria will get through, but that’s ok. Remember, there are bacteria all over our body. We want the good guys, not the bad guys. If candida takes over, an abundance of candida increases zonulin levels, the substance that controls the tight junctions between enterocytes in the gut, which leads to weaker junctions and the development of leaky gut. And here’s a scary fact for you: candida filaments also penetrate directly through the wall of the gut lining and contribute to leaky gut in this manner as well. In other words, picture centipede looking things with very long legs that kind of drill into the gut lining. The intestinal wall will also get dry and cracked. All of this makes for a gut that is much more permeable than it should be. At this stage pathogens and undigested proteins make it into our bloodstream, overwhelming the body’s immune system. Proteins have to be broken down completely or else the body sees them as foreign proteins and reacts accordingly. This is how most allergies happen.

And that gut drilling thing candida does – it does it all over the body as well, opening up pathways for infection throughout the body.  It’s easy to see how candida wrecks havoc on the liver. Consider the gut-liver axis. 70% of the blood flow to the liver is flowing from the gut. The liver quickly becomes overwhelmed with the toxins produced by candida.

I could go on and on about candida, but I’m attempting to write my shortest gut-health article to date, so I’ll stop here.

If you want to see a list of the top 25+ supplements for killing fungi, this is your list. Below is a list I put together a supplement stack with just a few that work very well to put the gut back into homeostasis.

You could probably take lots of supplements every day and eat like the average health-conscious person does and be fine. If you don’t want to take supplements forever, you’ll need to adopt a much healthier diet.

Eat a very large salad (7-9 cups) for breakfast. The salad has at least 10 different vegetables and a few different herbs.

Don’t let anyone cook or prepare your food for you. This means no boxes or cartons or almond milk. Make it yourself. No restaurants, not premade dinners, no prepackaged meals, your foods you buy should have only one ingredient.

Start off with cranberry lemonade and a huge salad every morning. For lunch, for those that aren’t very sick, do a smoothie or snack on some nuts and/or fruit, or we finish that massive breakfast salad.

For dinner, cook from scratch, which will take preparation and time, but it gets easier. Try rice and beans, quinoa, lentils, millet, and amaranth. Some of these foods are not recommended on candida-cleanse diets, but I feel they are beneficial when one is eating the aforementioned salads. Also, we add lots of raw vegetables and herbs to our dinners as well. For instance, the rice and beans go great with raw chopped tomatoes and avocado, diced onions and garlic, and shredded turmeric and ginger. Eat raw herbs and cooked herbs together for maximum health benefits.

The salads are the most important part of this protocol. More than supplements, more than anything save getting enough water, the salads are imperative. Eat lots of raw vegetables. Eat a variety of them. Your fridge should be full of produce! There is nothing more beneficially life-changing than developing a salad habit when the salads are big and diverse and homemade. They do more than any supplement or any other food to clean the intestinal walls of filth and develop a beneficial gut ecosystem.

For those with very serious gut issues, legumes and grains may be a no-no for the first few weeks at least, but when enough salad has been consumed, the gut should be able to reap many benefits from cooked foods like the dinner meals aforementioned. I recommend, for those who are very sick and who have a hard time digesting foods, to slowly add in the aforementioned dinner foods into salads first.

Sweet fruit should be severely limited, and for those who are chronically ill, avoided until the gut is working well. Grapefruit, cranberry, avocado, lime, and lemon do not fall under this category.

Juicing with fruits is not much better than refined sugar, so don’t make the common mistake of thinking a fresh-juice fast is going to get you well.

Modern fruit has too much sugar in it; I don’t recommend being a fruitarian, especially with an abundance of candida. The key to fixing the gut is a very wide variety of fresh raw vegetables and herbs. Some fruit is great, but too much fruit can send even a healthy gut into fungal overload.

Wheat and oats should be avoided until gut health is restored. Wheat and oats tend to be drenched in glyphosate before they are harvested, and wheat has a host of other issues regarding health. If you want to eat bread, make your own using heirloom seeds and old-school practices.

You need a lot of different kinds of bacteria to make a healthy gut colony. Different bacteria like different foods, and the most beneficial bacteria like the healthiest foods. Raw vegetables and herbs feed the gut the best, producing the healthiest bacteria. If you think about it, nature really wouldn’t work any other way. A lot of health practitioners want to limit the diet when someone is sick. They also often say to avoid raw produce. These two ideas are wrong! I work the other way. Limit sweets, including fruits, and eliminate refined and processed foods, but expand your healthy whole foods that don’t feed pathogens, and fresh raw produce is best.

It takes around six months for spores to die off. It takes about as long for the gut lining to heal. Fortunately, you can build a healthy biofilm full of beneficial microbes much faster than that. Unfortunately, spores are ready to come to life as soon as they’re feed. For anyone with systemic fungal related health issues, it takes six months of being very careful and strict on the diet – six months from the day, after all, symptoms are gone – to really get rid of candida, other fungi, and chronic illness.