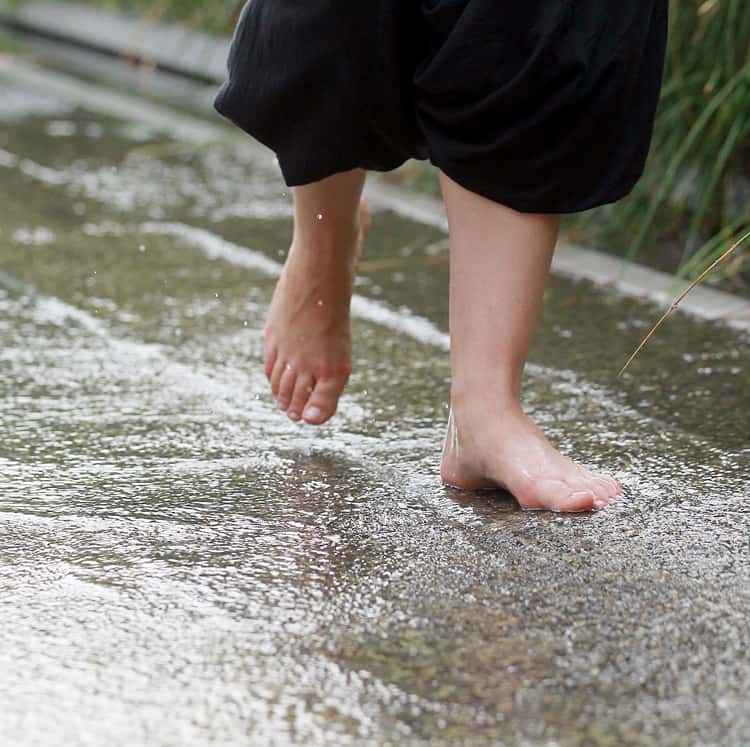 Earthing: Our Vital Connection to the Earth

What could help Tour de France riders sleep soundly, heal road rash and tendinitis, and feel vitality and high morale during the grueling days of the race? The secret is the special sleeping bag—an “earthing” bag. The discovery of how to use the Earth’s energy for healing can benefit everyone just as the energy has benefited those who go barefoot outdoors.

What could help you sleep soundly, feel vitality and high morale?  The secret is the special sleeping bag—an “earthing” bag. The discovery of how to use the Earth’s energy for healing can benefit everyone just as the energy has benefited those who go barefoot outdoors.

The ancient Chinese knew about the healing capacity of the Earth and called the energy Earth qi. Matteo Tavera, a French agronomist, saw all living beings as antennas electrically related to the Earth and sky. He deplored our modern lifestyle and said in 1969 in his book La Mission Sacrée, “The electrical contacts are [now] slowed down or totally missing.”

Clinton Ober arrived at his understanding of earthing by connecting intuition, traditional medicine, and observation with modern science. He describes how he came to this understanding in the book Earthing: The most important health discovery ever? by Clinton Ober, Stephen T. Sinatra, M.D., and Martin Zucker.

Born in 1944 and raised on a farm in Montana, Ober became responsible for the farm and his five siblings as a teenager, when his father died. An elder relative counseled him that a higher education wasn’t needed, that knowledge could be found by reading and consulting experts.

After farming, Ober went into the business of installing cable TVs and became very successful in the cable and telecommunications industries.

In 1993, after a life-threatening illness, Ober realized he was a slave to his possessions, gave away or sold all, and embarked on a journey around the United States to find his mission.

His first hint came in Florida: “Then one night while sitting and staring across the bay while parked in Key Largo and asking what should I be doing, I automatically wrote on a piece of paper ‘become an opposite charge,’” he says in the book.

“Upon rising the next morning, an odd notion went through my mind that the earth itself was trying to tell me something. … A compelling force would lead me to understand that we humans have a bioelectrical connection with the earth—one that with simple ground contact, neutralizes charge in the body and naturally protects the nervous system and the endogenous fields of the body from extraneous electrical interference.”

Ober continued his journey and came to rest in Sedona, Ariz., still wondering what his mission was. In 1998, the answer came out of a question: “Could wearing rubber—or plastic-soled shoes … insulating us from the ground, affect health?” His homemade experiments led him to his first published study, recounted below. Free Radicals

About a dozen years ago, chronic diseases were found to originate from inflammation, a condition caused by free radicals. Free radicals are molecules or atoms with unpaired electrons in their outer shells. They circulate in the body, stealing electrons from healthy tissues.

The results are chronic diseases, from gum disease to cancer. The circulation of too many free radicals is called oxidative stress, which is believed to play a major role in causing aging and age-related diseases.

Exposure to electromagnetic fields (EMFs)—low-grade electronic pollution from electronic equipment and the wiring systems in our buildings—increases inflammation and weakens our immune systems. EMFs also decrease melatonin, a sleep-regulating hormone.

For Ober’s first study, Grounding the Human Body to Neutralize Bio-Electrical Stress From Static Electricity and EMFs, published in 2000 in ESD, he chose 60 subjects who had muscle and joint pains and problems with sleeping. It was shown that all the subjects had an electrical current on their bodies that averaged more than 2 volts.

They were randomly divided into a grounded group and an ungrounded control group. Both group’s electric fields were comparable, the controls being slightly weaker. All were given carbon-fiber mattress pads for their beds with a wire going to the ground outside the bedroom. For 30 subjects, the wire was connected to the ground, which reduced their field to an average of 10 millivolts or less while sleeping.

The results were strongly in favor of grounding. One hundred percent of the grounded subjects felt refreshed upon waking. About three-quarters felt relief from chronic pains, and 80 percent had relief from muscle stiffness.

None of the controls experienced pain relief from muscles or joints, but three controls felt improvement in every other category. The grounded group also reported relief from respiratory ailments, PMS, sleep apnea, and hypertension.

Earthing: The most important health discovery ever? is a fascinating account of bare-bones research done without millions in grant money or a doctorate degree. The book is suitable for any age.

What do city dwellers do who don’t want to get their feet black while walking the city streets barefoot? (Yes, one can be grounded through concrete but not over the subway.) How do you ground yourself while in a high-rise? Ober has designed sheets, mats, even flip-flops for grounding.