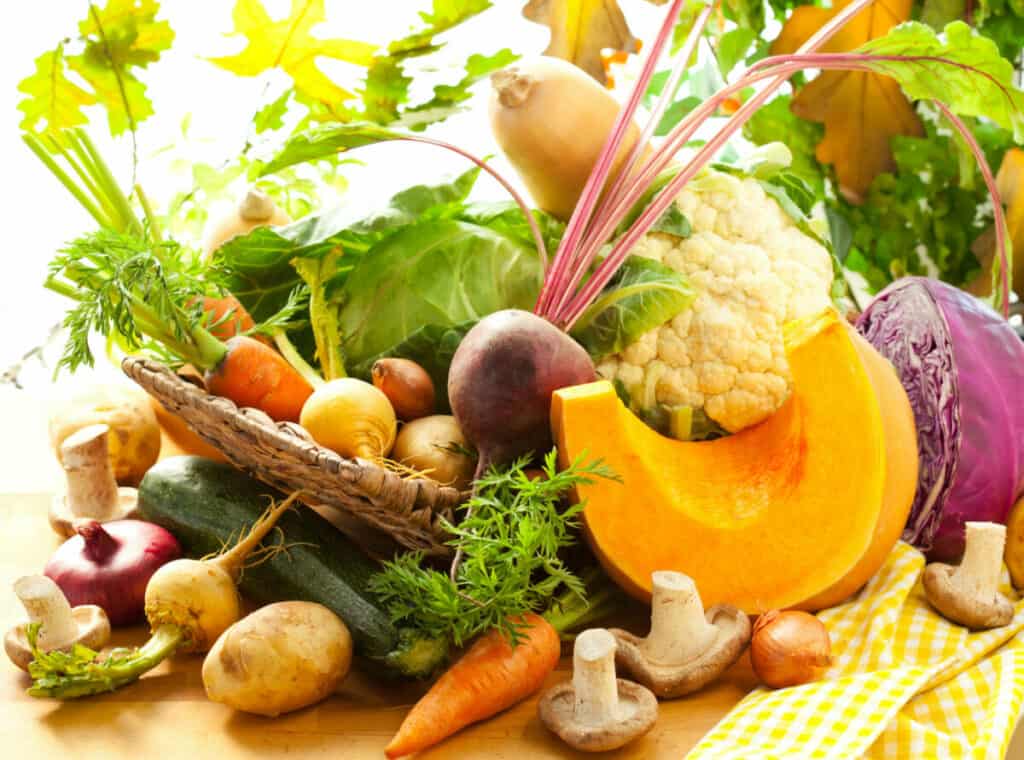 Eating to Be Cancer Free

Chris Wark was given a brutal diagnosis, but he didn’t want to take the chemo path.
BY CONAN MILNER TIME FEBRUARY 7, 2022

A cancer diagnosis can be devastating news. But once you get past the shock and fear, you long for guidance and support that can put you on the path to healing.

For cancer survivor Chris Wark, his path to becoming cancer free was paved with faith and food.

Wark was only 26 when he was diagnosed with stage 3 colon cancer. He didn’t have any science or medical background. He just had a notion that, with the right nutrition, he could heal.

“I was a very typical clueless cancer patient, and I did not know what to do,” Wark said. “I was operating mostly on instinct, intuition, and the belief that there had to be a way to recover, to heal, to increase the odds in my favor.”

It all started with a dull ache in his abdomen. Wark initially thought it might be an ulcer, but he turned to medical professionals to rule out something more serious. What they found was a golf ball-sized tumor in his large intestine. Doctors called for immediate surgery.

When Wark woke up in the hospital after surgery, his guts felt like they were going to explode, and his situation was worse than doctors anticipated. His tumor had spread to his surrounding lymph nodes. Lots of this cancerous tissue was removed during surgery, but Wark was told he would need about a year of chemotherapy to address the cancer that still remained in his body.

However, Wark began to doubt this path with his first meal served in the hospital. After having his abdomen sliced open and dozens of lymph nodes removed, he received the worst cafeteria food imaginable: a sloppy Joe.

Gazing at the loose ground meat on an institutional-grade white bun, Wark wondered why he wasn’t getting something healthier, or at least more digestible.

Wark was puzzled by what he saw as an obvious disconnect between health care and healthy food.

He asked his surgeon if he had any nutritional advice to address his abdominal cancer. “Nah, Just don’t lift anything heavier than a beer,” the surgeon replied.

Although medical experts didn’t acknowledge the influence of food, Wark still imagined he could heal his body by simply eating better. But when he shared his ideas with family and friends, they thought he was crazy, so he reluctantly went to see an oncologist.

His oncologist told him he had a 60 percent chance of getting five more years to live if he did chemotherapy. When asked if there were any alternatives, the doctor replied: “There are none. If you don’t do chemotherapy, you are insane.”

Wark committed to trying chemo and scheduled a date to start. But the closer it got to his appointment, the more apprehensive he became.

“I wanted to understand why I was sick. I wanted to get to the bottom of that mystery. I wanted to do everything in my power to help myself heal, and what I found was that the conventional medical system was not offering me any hope,” Wark said. “The idea of poisoning my way back to health made no sense to me.”

So Wark blew off his chemo appointment and prayed for guidance. Two days later, he received a book in the mail from a friend of his father. The author was a man diagnosed with colon cancer in 1976, and his story was about how he opted out of conventional treatment and managed to heal himself through dietand lifestyle. He was still alive and in good health 30 years later, and it made Wark think that the path he imagined could have some merit.

Seeking a community of like-minded individuals, Wark soon sought other books written by cancer survivors and holistic physicians telling similar tales. The common thread in all of these against-the-odds survival stories was that food proved to be a healing force. It inspired Wark to adopt a raw food diet. Just plants. All organic.

“It was back to the Garden of Eden,” Wark said. “I was only eating food straight from the earth in its pure and natural state. I never heard of a raw food diet before, but I was very intrigued and excited by this idea, and I wanted to know what would happen to my body if all I ate was raw fruits and vegetables. It was so strange and foreign and radical to me. I loved it.”

Next, Wark began looking for doctors who also saw food as a tool for healing. His mother introduced him to a clinical nutritionist, and the nutritionist referred him to a seasoned surgical oncologist—a doctor who had practiced conventional cancer treatment for years but had decided to switch to a more natural and nontoxic approach.

With the help of his team, and his own hard work, he managed to kick cancer. Eighteen years later, he remains cancer free. He recounts his journey and the limitations of conventional cancer treatment in his book “Chris Beat Cancer.”

Wark’s story was featured on the award-winning documentary, “The C Word” and on the “Truth About Cancer” series. But he maintains that he’s neither lucky nor special, he’s just a regular guy who listened to his instincts and took massive action to help his body heal.

“I eliminated everything in my life that may have contributed to my disease,” he said.

But cancer wasn’t always such a prevalent killer. In the early 20th century, indoor plumbing and medical advancements did a lot to bring down death rates overall. But by the end of the century, cancer deaths had mostly grown. President Richard Nixon famously called for a War on Cancer in 1970, but for decades, doctors and patients seemed to be losing the battle.

The U.S. cancer death rate peaked in 1991, but has since decreased 27 percent. The American Cancer Society credits improvements in the ways we can prevent, find, and treat cancer, but states that “the decline in the death rate is largely due to fewer people smoking.”

Wark says this detail points toward a path that more cancer patients should be encouraged to take. Those hoping to lower their risk of cancer can benefit from this path as well.

“It’s not because treatments have made these huge strides. It’s because we’ve had a massive decrease in cigarette smoking, and cigarettes are the No. 1 cause of cancer,” Wark said. “My mission is one of prevention. If we could educate the public on the diet and lifestyle choices that are causing chronic disease and the ones that will prevent chronic disease, then we can see a shift in population health.”

Wark’s own path to healing may have been a leap of faith, but he later learned that there’s plenty of science to corroborate his experience. Several years after he healed from cancer, he wanted to understand how exactly his health food path made him well.

“I wondered if my story could be a fluke. Maybe I was just lucky. Was there any science to support natural healing methods, evidenced-based nutrition, and holistic health? I learned that there was more science than I could ever read in a lifetime.”

With each study he read, Wark became increasingly inspired. He learned that the most powerful anti-cancer vegetables were the ones that he was eating every single day: garlic, onions, leeks, broccoli, cauliflower, kale, and mushrooms as well as fermented foods such as sauerkraut and kimchi, and spices like turmeric, oregano, and cayenne.

Science validates the anti-cancer properties of these foods, but the heart of the concept is common sense.

Wark is inspired to pass on what he’s learned to others and shine a light on the many successes found in a natural approach to cancer treatment. He is a patient advocate and has a blog detailing his journey for more than a decade. It features interviews with other cancer patients who opted for natural medicine to cure their disease and holistic doctors who provide care on this path.

The path to healing Wark describes takes a lot of dedication. Contrary to the magic bullet concept of health care, natural healing is more than one miracle herb, or a few appointments with a functional medicine physician. It’s a 24/7 lifestyle, a self-empowered mindset, and a long-term commitment.

Wark’s book is critical of the modern cancer industry and conventional cancer treatment, but he doesn’t shun patients who choose to take this road. He says the power of food is available to anyone willing to harness it.

In addition to encouraging a better diet, Wark says the mental, emotional, and spiritual side of healing is a big, yet often overlooked, part of the practice. He mentions patients who do everything right, eat all the anti-cancer foods, do all the beneficial routines, but they still can’t seem to get better.

“They don’t address their emotional pain. They’re carrying a lot of anger, bitterness, and resentment toward people in their past. The stress produced by these unresolved emotional conflicts can outweigh anything else you do. It can be the one barrier to healing.”

Unforgiveness can be the block that stops healing, he said.

“I’m constantly encouraging everyone in our community to forgive every person who ever hurt you. Let go of anger and resentment, fear, worry, and anxiety. Embrace life, health, joy, and peace.”

Of course, confronting complex issues like these is often a lot easier said than done. But there are many examples that show it can be done.

“Cancer taught me gratitude,” Wark said. “I had to learn during the process to give my fears and worries to God, release them. To not let the fear consume my mind and my heart.”