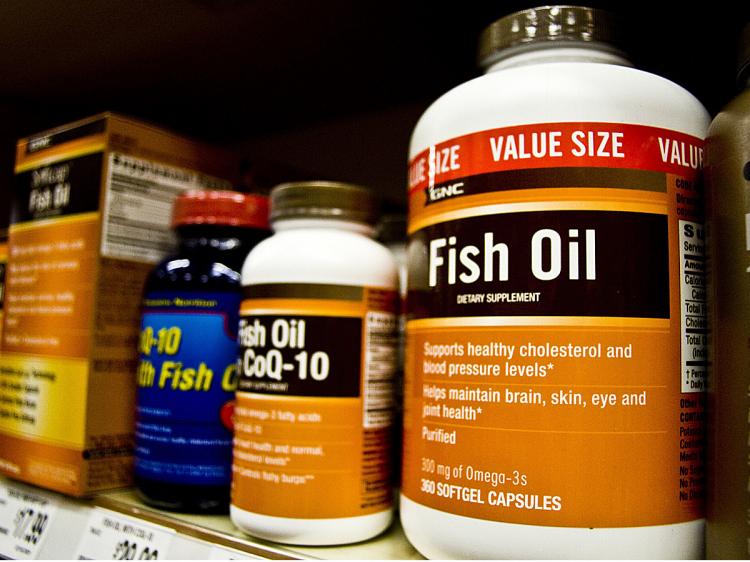 One of the foundational principles of the Nutritarian diet is to limit or avoid animal products. Many people know that they need omega-3 fatty acids in their diet, so they eat fish as their primary source of these nutrients. But while a small amount of wild-caught fish (less than 6 oz. per week) may be acceptable, it is still not a favorable source of EPA and DHA. That’s because fish may provide pollutants and other serious drawbacks:

My opinion is that the benefits of eating fish do not outweigh the risks—especially when you can use a clean algae-based omega-3 supplement. Additionally, an algae-derived DHA and EPA, such as Quell Fish Oil EPA/DHA plus D3, is a more sustainable option, and it is free of the environmental pollutants that accumulate in the fatty tissues of fish. If you do eat fish, I recommend limiting your consumption to 6 ounces per week, and sticking with varieties that are lowest in mercury, such as trout, flounder, oysters, sardines, shrimp, pollock and wild salmon.

Can I Meet My Omega-3 Needs With Nuts and Seeds?

Conversion of ALA (from walnuts, flax seeds and chia seeds) varies between individuals, is overall inefficient, and is most often insufficient to provide optimal DHA levels. A study measuring blood DHA and EPA in a vegan population found that 64 percent were insufficient and some were very severely deficient. Those insufficiencies were not related to ALA intake (which was far above recommended intake), suggesting that genetic or other inherent differences in conversion enzyme activity determines DHA and EPA levels more than ALA intake.  Also in this study, a moderate dose of algae-derived DHA and EPA (254 mg/day) was able to normalize the levels when rechecked four months later. This research confirms that high ALA intake in many cases is not enough to assure DHA and EPA adequacy, and suggests that omega-3 supplementation is a useful adjunct to a healthful diet.

How Do Omega-3s Benefit Brain Health?

The long-chain omega-3 fatty acids DHA and EPA contribute to many aspects of brain health,7 but most modern diets are low in DHA and EPA, and research has confirmed that vegans tend to have a low omega-3 index.6 DHA is concentrated in the membranes of brain cells; there, DHA provides structure to the membrane and is involved in signaling, connectivity between cells, and neurotransmitter production, among other important actions. EPA and DHA have some common functions and some distinctive ones. DHA is most often associated with brain development, learning and cognition, and EPA with mood and behavior, and anti-inflammatory effects.

Omega-3 fatty acid adequacy is associated with lower risk of premature death, according to a meta-analysis of 17 studies that investigated blood omega-3 levels and death from all causes. Participants in the highest fifth of combined blood DHA and EPA were 15-18% less likely to die over the follow-up periods of these studies, a median of 16 years. Similar associations were found for death from cardiovascular disease and cancer. In addition to their crucial role in the brain, DHA and EPA have triglyceride-lowering, anti-inflammatory, anti-platelet, and anti-hypertensive properties, plus effects on cell membranes that may also contribute to promoting longevity.

DHA and EPA are building blocks of human brain and retina tissue, and sufficient omega-3 levels  are important for early neurodevelopment and throughout life for vision and brain function.  Maternal stores provide the developing baby with the DHA for brain and eye development, and after birth, the DHA is provided by breast milk.

Although the time between birth and 2 years represents the phase of the brain’s largest growth, brain development is not complete after age 2; it continues through childhood and into the late twenties.  Omega-3 supplementation trials in children have reported improvements in measures of school performance (such as reading, spelling or learning ability) or behavior.

One interesting study used functional MRI to view activity in the brains of young boys (8-10 years of age) who took either placebo or a DHA supplement for 8 weeks. The boys who took DHA showed increased functional brain activity during a cognitive task, and their level of activation correlated directly with their blood DHA levels. This study suggests that DHA in the brain is involved in the learning process in children.

This research has significant implications, since early academic success helps to build confidence and set the stage for future college and career performance. Another study on teens (age 13-15) in the Netherlands found that higher blood omega-3 levels correlated with better scores on cognitive tests.

Insufficient DHA levels have been implicated in a number of childhood cognitive and developmental disorders such as ADHD, dyslexia, and autism spectrum disorders. Supplementation with omega-3s, especially in combination with certain omega-6 fatty acids, has been found to improve symptoms in children with ADHD. Not enough research has been done on autism spectrum disorders to determine whether omega-3 supplementation would also be helpful for these children.

DHA and EPA supplementation showed improvements in depression symptoms and learning ability in adulthood. At this stage of life, omega-3 adequacy helps to maintain optimal brain function, prevent depression, and lay the groundwork for a healthy brain later in life. A 6-month study of DHA and EPA supplementation in young adults (18-45 years of age) documented improvements in measures of memory. Additionally, 12 weeks of DHA supplementation was found to improve blood flow to the brains of healthy young adults during a cognitive task.

For women, it is important to note that depletion of DHA stores during pregnancy is thought to be responsible for many cases of postpartum depression. Pregnancy and nursing is an important time to maintain adequate DHA not only for the baby, but for the mother too.

Other studies have investigated brain volume and structural changes, finding that higher blood omega-3 levels are associated with larger brain volumes and reduced dementia-related changes in older people, implying that sufficient DHA and EPA could help to prevent brain shrinkage with age.

Beginning supplementation once memory problems have become apparent may have limited utility compared to maintaining adequate levels throughout life. For preventing cognitive decline in older adults, the supplementation trials have shown that healthy older people, or those with mild cognitive impairment or mild memory complaints may benefit from omega-3 supplementation, whereas those with established Alzheimer’s disease likely do not.

For example, one study in adults with mild age-related cognitive decline compared DHA and placebo, taken for six months, and administered learning and memory tests before and after. In this study, the DHA group improved their learning and memory scores. A similar study that tested the effects of DHA on subjects who had already been diagnosed with Alzheimer’s disease did not find any cognitive improvements.  This research implies that maintaining sufficient omega-3 levels throughout life is an effective preventive measure.

It is known that DHA levels are low in the brains of Parkinson’s patients. Similarly, in my clinical experience, I have seen a number of elderly, male vegans who developed Parkinson’s disease; these men were severely deficient in DHA. DHA-EPA deficiency has been shown to sensitize the brain to the chemicals that play a role in Parkinson’s disease in primate studies and other animal studies. Alzheimer’s disease and Parkinson’s disease share the underlying causes of oxidative stress, inflammation and mitochondrial dysfunction. DHA and EPA may offer protection by producing anti-inflammatory mediators in the brain.

The Takeaway: Protect Yourself Now

No matter what your age, maintaining adequate omega-3 stores is crucial now and for the later life health and functionality of your brain. A Nutritarian diet provides many nutrients that benefit brain health but to assure our DHA-EPA intake is optimized we should maintain an omega-3 index greater than 5, because lower levels are increasingly associated with cognitive impairment and brain shrinkage.

It just makes good sense to either test your blood for omega-3 fatty acid levels to assure that you are sufficient, or take a supplement, or both.