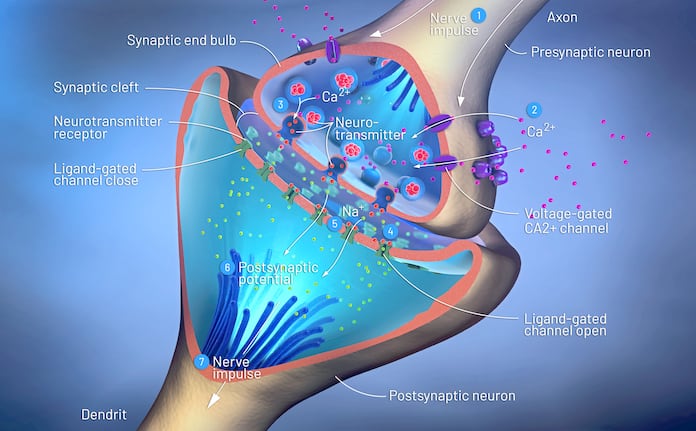 How Neurotransmitters Can Affect Your Health

Problems with your brain’s chemical messengers can leave you confused, stressed, sad, and more.

Brain function and thought patterns are intimately related to neurotransmitters, the chemical messengers that carry signals between neurons, or nerve cells, and other cells within the body. Neurotransmitters are essential for various physical and psychological functions including mood, anxiety, fear, joy, and happiness. They are also involved in regulating heart rate, sleep, and appetite.

How Are Neurotransmitters Produced in the Body?

It’s worth mentioning that genetic variants can stop the production of these enzymes needed to make neurotransmitters.

A deficiency in acetylcholine would look like a decrease in visual and verbal memory as well as frequent memory lapses. Individuals needing acetylcholine support might notice a decline in creativity or comprehension. Difficulty calculating numbers or recognizing objects and faces are also indicative of an acetylcholine issue.

Epinephrine and norepinephrine are involved with the body’s “fight-or-flight” response. When released into the bloodstream, they increase heart rate, pupil dilation, and shunt blood to muscles. In the brain, they stimulate receptors for mental speed, focus, and concentration. Likewise, a catecholamine deficiency might look like a reduction in mental alertness, speed, concentration, and cognition.

Dietary support for catecholamines could include foods high in tyrosine such as cheese, eggs, fish, nuts, seaweed, and turkey. Foods high in caffeine such as coffee, tea, and cacao also stimulate epinephrine and norepinephrine. That’s why caffeine can increase overall brain function.

Dopamine has various functions in the brain including motor coordination, mood, attention, learning, along with motivation and reward. It’s largely associated with the pleasure system of the brain.

Individuals with dopamine imbalances may experience feelings of worthlessness or hopelessness, or self-destructive thoughts. They often have an inability to handle stress and may feel angry while under stress. They sometimes desire isolation or have a lack of concern for loved ones.

Also known as the “happiness neurotransmitter,” serotonin is found in both the central and peripheral nervous systems and is involved with mood, sleep, temperature regulation, and appetite. In fact, roughly 80 to 90 percent of the body’s serotonin production occurs in the gut.

The body’s ability to create serotonin is a process that demands protein intake and absorption along with vitamins B3, B6, B9, B12, iron, and magnesium. Deficiencies in these nutrients can promote serotonin imbalances. Furthermore, blood sugar imbalances, tryptophan deficiencies, and gut problems can greatly affect serotonin levels.

Gamma-aminobutyric acid (GABA) is the main inhibitory neurotransmitter in the brain. Those with impaired GABA production usually experience feelings of dread, anxiety, or panic for no reason. They are easily overwhelmed, worry easily, and have a restless mind. Sometimes, it’s associated with disorganized attention, depression, and insomnia.

It’s also important to know that if you have a leaky gut, it can contribute to a compromised blood–brain barrier. Occludin and zonulin are two proteins that control both the gut barrier and the blood–brain barrier. When occludin and zonulin are elevated, it’s indicative of a leaky gut and a leaky brain. This means there is likely significant inflammation within the brain and neurotransmitter function can become faulty. If you suspect a problem with neurotransmitter signaling, restoring barrier function within the gut and brain are some of the first aspects that should be addressed.

It’s important to note that proper neurotransmitter production and brain function rely on many important nutrients. It is important to not only consume these valuable nutrients, but also be able to digest and absorb them. If you have digestive distress or suspect a leaky gut, it will be difficult for the body to utilize the nutrition in your food.

If you are concerned about any of these issues, a doctor such as a naturopath or integrative physician can do a thorough functional blood workup and gain important insight into gut integrity, blood sugar handling, and nutrient status. They can also order other functional lab testing to shed light on neurotransmitters and brain function.