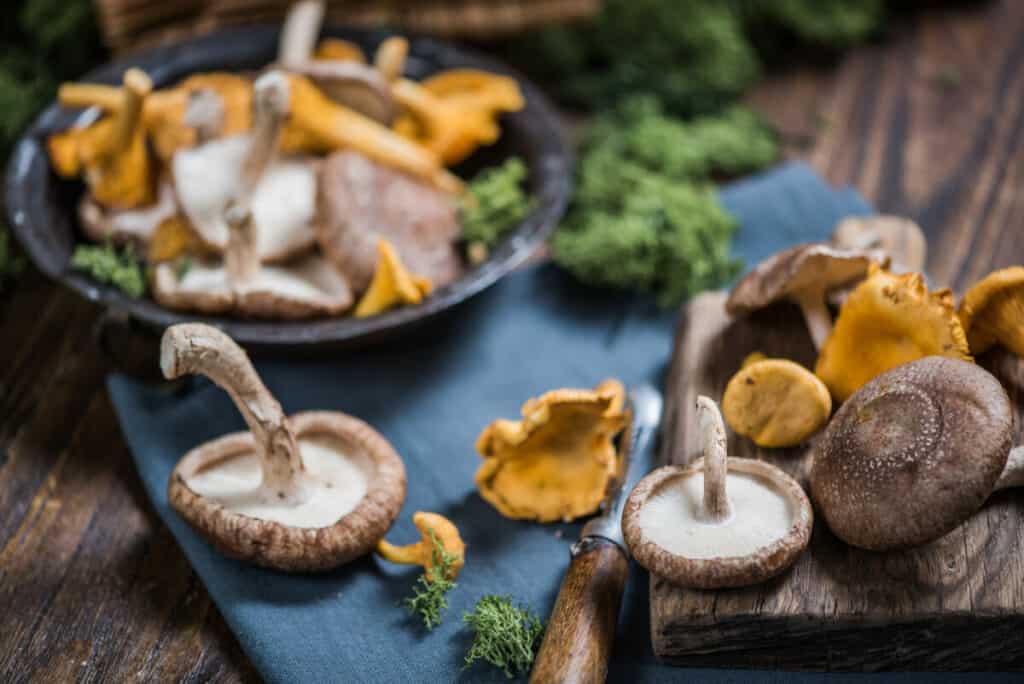 These fantastic fungi offer a range of health benefits, some of which have been recognized for millennia.
BY SANDRA CESCA TIME MARCH 22, 2022

Medicinal Mushrooms come in many different shapes and colors and grow best in warm moist soil full of decaying organic material. They are nature’s recyclers, breaking down what has died so it can be used to create new life. Since they contain no chlorophyll like green plants, they can’t perform photosynthesis. Consequently, they must get all their nutrients from the soil. The habitat dictates the species of mushrooms that can grow there. Germination takes place by spores rather than seeds, and their roots are called mycelium.

Scientists have a hard time agreeing on how many fungi there might be in the world, but only about 120,000 of them have been described so far. Only two percent are poisonous while many others are used for their medicinal properties. Although most mushrooms are edible, few species are actually consumed, as most can be tough, woody, or gelatinous, give off an unpleasant smell, or taste bad. Only about 20 varieties are truly flavorful.

At mbs, we offer the following high quality products:

Mushrooms have been used for thousands of years in cultures around the world, particularly in Eastern countries, as highly valuable tonics for life, energy, longevity, and for various spiritual ceremonies. Some of these mushrooms have been used extensively in Chinese and Ayurvedic medicine due to their medicinal properties.

Traditional Japanese medical practices called Kampo have been in existence since the fifth century and are based on traditional Chinese Medicine but have been adapted to Japanese culture. Medicinal mushrooms are commonly prescribed in Japan, particularly for cancer patients under the umbrella of “integrative oncology.”

While China has been the leader in mushroom use for health benefits, practitioners of Ayurveda originating in India have been more cautious. Many believe a lack of studies and funding on the use of mushrooms has left a gap in the research to support their efficacy.

Today the most commonly consumed mushroom variety is the button mushroom, or Agaricus bisporus, which makes up about 40 percent of the mushrooms grown around the world. Among the medicinal mushrooms, Shiitake Lentinus edodes is now the world’s leading cultivated edible mushroom, at about 22 percent of the world’s supply, with China as the major producer. The jewel of all edible mushrooms is the truffle. Referred to as the “diamond of the kitchen” truffles are the most expensive mushroom in the world. They grow near tree roots and are sniffed out by dogs or pigs that have been trained to recognize the truffle’s distinct odor.

What Are Medicinal Mushrooms

In the last few years, interest in the medicinal properties of mushrooms has exploded, earning them the status of a “power food.”

Mushrooms in general are loaded with beneficial nutrients like B vitamins, antioxidants, and fiber, and are composed mostly of water, carbohydrates, and proteins. Medicinal mushrooms have exceptional properties known to be beneficial to the body’s metabolism and immune system.

Mushrooms can also help scavenge free radicals during detoxification of the body.

Research has paid special attention to mushroom polysaccharides, which are a type of carbohydrate that contributes to the metabolism of sugars such as glucose. The most important of these is beta-glucan, a phytochemical polysaccharide found in the cell walls of medicinal mushrooms.

Studies have shown that beta-glucan helps fight inflammation and aids the immune system by activating killer T-cells. These coordinate multiple aspects of adaptive immunity, including responses to intracellular pathogens, allergens, and tumors.

Medicinal mushrooms have been examined in depth in Eastern clinical studies, and many of their health benefits have been proven. However, each mushroom is unique and provides its own distinct health advantages. Studies are still new to Western medicine, and solid evidence for humans still needs more research, since much of the work has been done on mice.

Reishi: (ling zhi) Ganoderma lucidum has been used by traditional Chinese Medicine for over 2,000 years to help combat obesity and inflammation. Scientific evidence from a study published in Nature Communications in 2015 showed a reduction in obesity in mice by modulating their gut microbiome.

Lion’s Mane: Hericium erinaceus improves mental clarity, is packed with antioxidants, and strengthens the immune system. It may help slow the onset of dementia and possess anti-depressant and anti-anxiety properties. It can also help with recovery from neurological damage.

Shiitake: (xiang gu) Lentinula edodes has been widely cultivated from about A.D. 1000. and is particularly good for the heart. It has been shown to lower LDL cholesterol in mice and contains compounds that inhibit the absorption and production of cholesterol in the liver.

Maitake: Grifola frondose is popular in Japanese Kampo medicine and often grows to one hundred pounds. There is some limited clinical evidence that it can lower blood pressure, improve cholesterol levels, and lower blood sugar.

Enokitake: Flammulina velutipes is prized for its taste, its availability in winter when there are few other fungi fruit, and for a range of medicinal benefits reputed to help with everything from tumors to dementia to gastric ulcers.

Cordyceps: (dong chong xia cao) Cordyceps sinensis is a parasitic fungus that grows on the larvae of insects. It is one of the most commonly used mushrooms in traditional Chinese Medicine for the treatment of chronic kidney disease, and many people take it to improve stamina.

Some medicinal mushrooms, such as shiitake, enokitake, lions mane, and maitake, can be eaten by simply cooking them. Others, such as reishi or turkey tail, are too tough and bitter to eat and need to be made into tea, soup, powders, or tinctures that can be added to smoothies, teas, coffee, or sprinkled on cereal.

The nutraceutical market has been adding medicinal mushrooms to product lines for several years, but the variety is growing. These dietary supplements include multiple combinations that claim to deliver a broad spectrum of compounds to improve one’s health. Look for products made from 100 percent mushrooms, certified organic, and with a guarantee that it’s scientifically verified and doesn’t contain added fillers.

Increasing awareness of the potential side effects of synthetic therapeutic agents has led to increased efforts to seek out natural products with beneficial effects on health. This has led to a huge increase in the number of mushroom products appearing in the marketplace. More research is needed on the bioactive components in mushrooms to determine their biological responses in humans as well as their place in future pharmaceutical or nutraceutical applications.