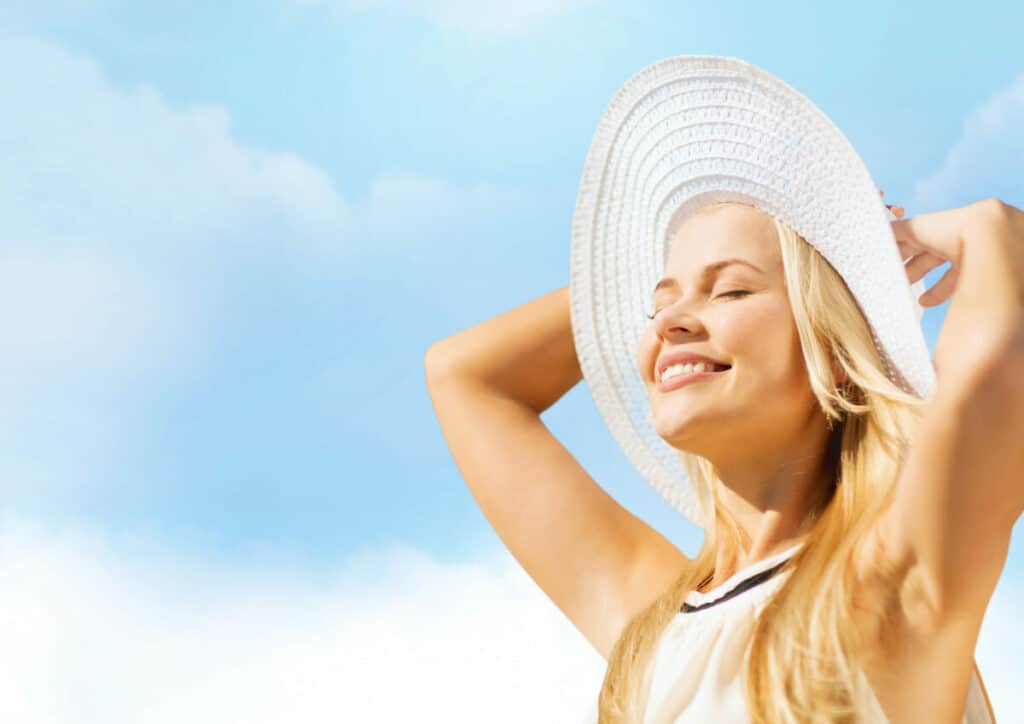 Prior to the use of electricity, human beings had an exclusively natural relationship to light. Our options were limited to the sun, a fire, or candlelight; all of which naturally emit red and near-infrared light.

That light acts as a nutrient for the human mind and body. Unfortunately modern, indoor lifestyles can lead people to become chronically depleted of natural light and its positive biological effects.

A lack of sunlight exposure can lead to a chronic deficiency of vitamin D3. Over time, this deficiency can put people at an “increased risk for many chronic diseases including autoimmune diseases, some cancers, cardiovascular disease, infectious disease, schizophrenia and Type 2 diabetes.”

To make matters worse, people have been taught to fear the sun’s ultraviolet (UV) A radiation. Many people excessively cover their skin with clothing and sunscreens, many brands of which have recently been found to contain harmful carcinogenic ingredients.

While healthier sunscreen alternatives exist, it’s important to remember that UVB radiation from the sun gives our bodies what it needs to produce vitamin D3. Healthful sun exposure is gradual sun exposure, especially if you are fair-skinned. We need to increase our time in the sun little by little to acquire a protective tan and decrease our susceptibility to burns.

Not All Light Is Created Equal

The sun radiates beneficial wavelengths of red and near-infrared light. Man-made, fluorescent lights that are found in many offices and businesses are not only devoid of these essential frequencies, these man-made lights can also be seriously harmful. The color temperature, flicker rate, and light quality of compact fluorescent light bulbs can induce a stress response.

Time spent indoors under artificial lighting can have an increasingly detrimental impact on our body’s natural rhythms over time. Varying qualities and wavelengths of light stimulate different biological responses. Maintaining a healthy circadian rhythm involves getting blue light early and avoiding it, or filtering it (on the screens of our devices for example), after dark. Simply put, we need a more nuanced and conscious relationship with light.

The good news is that people can supplement their light intake by investing in a device or visiting their local health spa.

We’ve known for decades that people at high latitudes who struggle with depression related to seasonal affective disorder (SAD) benefit from supplementing with a UVB light therapy device. In a study published in The Journal of Nervous and Mental Disease in 2017, researchers noted “a significant but modest improvement was detected after a single active light session” of only one hour.

LED light devices are more accessible and more affordable than ever before. Just make sure to do your research before buying to make sure you’re getting one that is right for your particular needs.

How Red and Near-Infrared Light Help Us

Thousands of studies in more than 70 countries have been conducted over the past couple decades demonstrating the promise of red and near-infrared light-related therapies. This vast amount of research suggests that nearly everyone can benefit in one way or another.

Athletes are benefiting from better recovery and performance while celebrities are treating their skin in order to reduce the impacts of aging such as “fine lines, wrinkles, skin roughness and intradermal collagen density increase,” according to a 2014 study published in the Journal of Clinical Laser Medicine and Surgery.

There is a long list of names for red light therapy. Common names include “phototherapy,” and “low-level laser-light therapy.” One of the most prominent names in the medical literature is “photobiomodulation,” or PBM. This area of study has received significant attention from the scientific and medical community in recent years.

Searching “infrared light therapy” on PubMed Central, a full-text archive of biomedical and life sciences journal literature, produces more than 10,000 results. It doesn’t take long to see why. Red or near-infrared light is a generally non-invasive, chemical-free, and demonstrably safe treatment that can be used for a wide range of ailments.

How does it work? “The absorption of red/near-infrared light energy, a process termed ‘photobiomodulation,’ enhances mitochondrial ATP production, cell signaling, growth factor synthesis, and attenuates oxidative stress,” write researchers in a review published in the Aesthetic Surgery Journal that looked at previous studies on the topic.

Mitochondria are the powerhouses of our cells and ATP is the energy source they create, which is critical for our cells and our overall health. Research found cytochrome c oxidase, an enzyme in the mitochondria, is stimulated by photons of near-infrared light. This triggers the mitochondria to produce more ATP, which then triggers the release of signal molecules that put genes to work protecting the cell in ways that “counteract cell degeneration” by repairing damaged mitochondria and releasing antioxidants. These antioxidants “work to clean up free radicals, highly chemically reactive molecules that can bond to, and alter, other molecules in destructive ways related to aging and cancer,” according to the Wisconsin Academy of Sciences, Arts, and Letters.

In an article on the Academy’s website, Janis Eells, professor of biomedical sciences at the University of Wisconsin, explains: “They [mitochondria] not only control the life of the cell, they control cell death too. If a cell becomes diseased or dysfunctional, the mitochondria send out signals which tell the cell to self-destruct in an organized fashion—so that it doesn’t take out its neighbors at the same time.”

Regulating free radicals prevents oxidative stress in the cell that can cause damage to proteins and DNA. Like plants, our cells absorb light to create the energy needed to make sure all this work is being done throughout our bodies.

Red and Near-Infrared Light as Medicine

For many, the suggestion that light can be used as a treatment might seem too strange or good to be true but using light as medicine is nothing new.

In 1903, Niels Ryberg Finsen was awarded the Nobel Prize in Physiology or Medicine “in recognition of his contribution to the treatment of diseases, especially lupus vulgarism, with concentrated light radiation, whereby he has opened a new avenue for medical science.” In 1910, John Harvey Kellogg published a book called “Light Therapeutics” which focused on the therapeutic use of incandescent lamps.

Studies and meta-analyses suggest that red and near-infrared light therapy can be effective for treatment of a whole list of other ailments that aren’t yet FDA approved. Athletes can even use red light therapy to enhance performance and to heal and regenerate muscle tissue. The treatment is so effective, it may raise ethical concerns. “We raise the question of whether PBM should be permitted in athletic competition by international regulatory authorities,” researchers write in an article published in the Journal of Biophotonics.

Many studies explore red light therapy’s potential for diverse uses such as reducing belly fat, increasing bone density, and increasing testosterone. Optimistic areas of research include exploring red light therapy as a potential alternative, or companion, treatment for brain disorders such as Alzheimer’s and Parkinson’s as well as different types of cancers.

Part of the reason red light therapy can be so effective is due to its “pronounced anti-inflammatory effects” with “both local and systemic mechanisms,” notes an article published in the American Institute of Mathematical Sciences’ journal AIMS Biophysics. This overall inflammation reduction is “particularly important for disorders of the joints, traumatic injuries, lung disorders, and in the brain.”

Studies show that red light therapy can benefit the whole body insofar that there “appears to be a systemic effect whereby light delivered to the body can positively benefit distant tissues and organs,” notes the AIMS article. This research is extremely promising considering that most chronic diseases such as Type 2 diabetes, Alzheimer’s, and cardiovascular disease involve systemic inflammation.

Longevity is a focus for a growing population of elderly around the world. “Among the non-pharmacological interventions studied for the treatment or prevention of age-related neurocognitive impairment, photobiomodulation (PBM) has gained prominence for its beneficial effects on brain functions relevant to aging brains,” notes a 2021 research review published in Aging Research Reviews.

“In animal models, the neuroprotective and neuromodulatory capacity of PBM has been observed. Studies using both animals and humans have shown promising metabolic and hemodynamic effects of PBM on the brain, such as improved mitochondrial and vascular functions. Studies in humans have shown that PBM can improve electrophysiological activity and cognitive functions such as attention, learning, memory and mood in older people.”

Similarly, studies show promise with regard to vision in the elderly population. Near-infrared light of wavelength 780 nanometers (nm) was used to treat age-related macular generation in a group of elderly subjects. “Visual acuity was improved in 95 percent of the subjects; most were able to see two rows lower on an eye chart,” reported researchers in their study published in the Journal of Clinical Laser Medicine and Surgery. The results of a two-week treatment lasted from 3 to 36 months with no observed adverse events.

If you’re wondering if there is more research related to a particular condition, search PubMed or another biomedical research database.

Getting Started With Red and Near-Infrared Light Therapy

Getting out in the sunshine is a great place to start for people who don’t want to invest in a red light device. Just make sure to be careful not to overdo it. Sunburn is a serious risk factor for skin cancer. For those looking to get a device, it’s obviously important to research and make sure you get something suitable to your needs.

Do your own research or contact an expert to find the wavelength and dose that is right for you. Experiment at your own risk, but with the assurance that “to date, there are no reports of major safety issues nor side-effects after near-infrared light treatment,” reports a research review published in Frontiers in Neuroscience.

Ari Whitten, author of “The Ultimate Guide to Red Light Therapy,” says: “It really matters what device you get. I want to put this caution out there because there are a lot of junk devices. There are a lot of devices that are one-fiftieth the power output of the devices that I recommend, and somebody who isn’t savvy to that, isn’t knowledgeable about why the power output of these devices matters, might just go on Amazon and buy some $30 device.”

Consult the interview with Ari Whitten to learn more about where to get started with red light therapy.