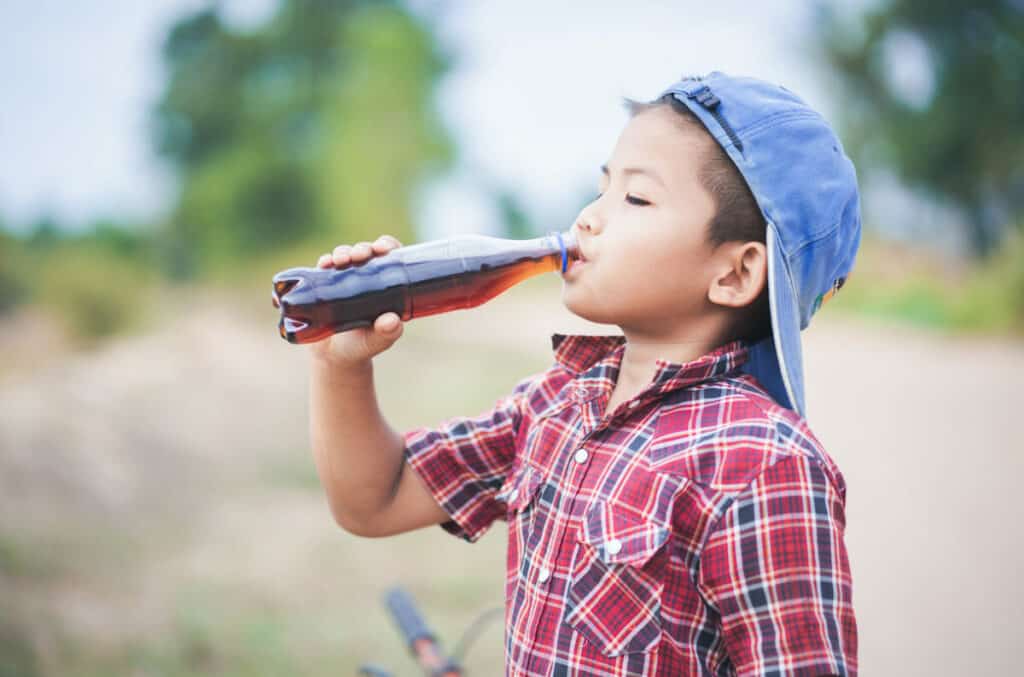 If you’re like most people, you’re aware of the prevalence of high fructose corn syrup (HFCS) in the food supply and the ongoing concerns about its health effects, such as its contribution to obesity.

Since 1980, soft drink producers have favored HFCS over real sugar from cane or beets as a sweetener (although “Mexican Coke” made with cane sugar is still available in some stores, labeled “Refresco” and “Hecho en México”). Food processors have followed suit, and today, HFCS is found in thousands of products, including fast-food offerings, bread and baked goods, tomato-based sauces, breakfast cereal, fruit drinks, salad dressings, yogurt, canned soups, candy, and even medications.

Why has HFCS supplanted sugar (sucrose) from cane and beets in so many foods? The price and availability of sucrose, especially cane sugar—often grown near the equator—fluctuates wildly, whereas corn is the largest U.S. crop, and also the most subsidized.

And if a cheaper price weren’t enough, HFCS offers easier usage. Unlike granular sucrose, which often must be dissolved in water by food producers, HFCS is a syrup and can be “pumped from delivery vehicles to storage and mixing tanks,” according to an article in The American Journal of Clinical Nutrition.

HFCS is not as popular with nutritionists, medical professionals, and food consumers as it is with food producers. For example, as much as 92 percent of U.S. corn is genetically engineered, and the long-term safety of GMOs hasn’t been studied by the Food and Drug Administration (FDA), the U.S. Department of Agriculture, or the Environmental Protection Agency, according to the Center for Food Safety.

HFCS’s links to obesity, insulin resistance, Type 2 diabetes, and high blood pressure are so clear, the Cleveland Clinic actually advises people to “keep this sweetener out of your diet.” According to the Clinic’s Dr. Mark Hyman, who works in the Clinic’s Center for Functional Medicine. “Fructose goes straight to your liver and starts a fat production factory” of triglycerides and cholesterol that raises the risk of nonalcoholic fatty liver disease. HFCS “can even cause fibrosis or what we call cirrhosis,” Hyman wrote in an article on the Clinic’s website. HFCS can also cause a “leaky gut,” which triggers inflammation, weight gain, and Type 2 diabetes.

In addition to GMO and metabolic worries, HFCS has also been found, in the past, to contain mercury, according to research published in ​​Environmental Health in 2009.

In 2010, as the bad press piled up for HFCS, its trade association, the Corn Refiners Association, petitioned the FDA to lose the chemical-sounding HFCS name and to be allowed to refer to its product as “corn sugar,” which would sound more like real food. The FDA refused. In 2011, Western Sugar Cooperative, Michigan Sugar Company, and C&H Sugar Company brought a suit against Archer Daniels Midland Company, Cargill, Corn Products International, and three other HFCS producers, charging that their use of “corn sugar” in ads constituted false advertising.

The faux terms have harmed consumers and producers of real sugar, the sugar groups said.

“If consumers are concerned about your product, then you should improve it or explain its benefits, not try to deceive people about its name or distort scientific facts,” Inder Mathur, president and CEO of Western Sugar Cooperative at the time, told the HFCS defendants.

In 2015, the warring parties settled out of court, and the terms weren’t disclosed.

According to the authors, it’s known that behavioral disorders such as attention deficit hyperactivity disorder (ADHD), bipolar disorder, and aggression, are linked to sugar intake and obesity, and the culprit might be high fructose factors. The authors suggest that high fructose intake activates “an evolutionary-based survival pathway” of fat storage and decreased energy expenditure that develops in animals to fight starvation or prepare for hibernation or long-distance migration. The effects in nonstarving humans may be deleterious, they hypothesize.

Specifically, high fructose and its metabolite uric acid likely induce a “foraging response that stimulates craving, impulsivity, risk taking, and aggression” in humans that can resemble ADHD—conditions that are characterized by decreased attention spans and increased locomotor activity, the researchers wrote.

Levels of uric acid are also elevated in those with problems of anger control and those who commit violent and criminal acts. Chronic stimulation of the survival pathway may also induce depression, according to the researchers.

Does the theory of an activated survival pathway also explain HFCS’s notoriety for causing obesity and overeating? The answer is yes, according to the researchers.

“Fructose is unique among all nutrients in its ability to trigger a starvation-like signal even in the absence of true starvation. … Specifically, fructose mimics a starvation-like state by dropping the energy (also known as adenosine triphosphate or ATP) in the cell during its metabolism,” they wrote.

“In addition, fructose stimulates hunger (via the induction of leptin resistance) and thirst (by causing a shift of water into the cell and raising serum osmolality). … The net result is that fructose stimulates food and water intake, increases energy (fat and glycogen) stores, induces insulin resistance to preferentially provide glucose to the brain, increases blood pressure and reduces sodium losses, and decreases oxygen needs by reducing mitochondrial activity and relying more on glycolysis. Thus, fructose is the ideal energy storing fuel.”

Clearly, if the body thinks it’s “starving” because of the lack of a “shut-off” or feedback mechanism, as the researchers hypothesize, overeating and even addiction to soft drinks and fast food would arise. Such addictions certainly aren’t hard to find. Luckily, the addictive effects from the metabolic impairment are likely reversible, and the researchers report anecdotal improvements when HFCS users embraced a typical Mediterranean diet.

In light of its negative metabolic effects, few people or groups, with the notable exceptions of “Big Food” and corn refiners, would defend HFCS as a valuable component to be added to our daily diet. However, HFCS isn’t likely to disappear from store shelves anytime soon because of its low price, agricultural availability, and ease of shipping and storage. Still, the possibility of links to mental and behavioral disorders—along with HFCS’s already known effects—should cause food consumers to give a long hard look at this ubiquitous food ingredient.