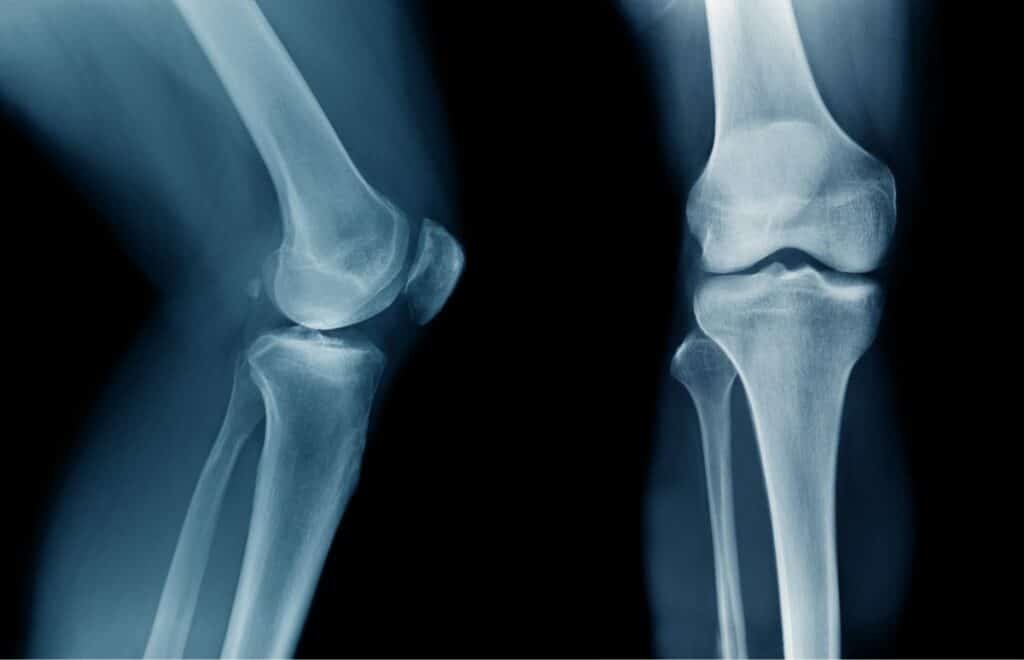 When climbing up and down stairs, if you often feel stiffness in your legs and feet, as well as a dull pain in your knees, then you should watch out for degenerative arthritis. If you don’t pay attention to these signs from your body, you might get degenerative arthritis even at the tender age of 20.

We spoke with Dr. Dawei Guo, who explained the four main signs to watch out for, who is most prone to degenerative arthritis, and what the four stages are.

Nowadays, many people spend a lot of time on “sitting activities”, such as sitting on the couch all day watching TV. These activities don’t put a lot of pressure on the knee joints, which then would become fragile. However, on weekends, they go to the gym to do dynamic exercises, which would exert stress on the knees and cause joint problems. So, what are the signs of degenerative arthritis?

1. “Clicking” sounds when the knee joints move;
2. Pain, swelling and weakness in the joints;
3. Stiffness of the joints, difficulty in movement, and inability to stand up after squatting;
4. Pain in the knee joints when going up or down stairs

Many young people are sedentary for long periods of time and have poor circulation in their lower extremities, which would cause the knee joints to become very fragile due to infrequent stress. This has already led to a gradual decline in the age of onset for degenerative knee osteoarthritis, which is no longer exclusive to the elderly. Therefore, regardless of age, if any of the above signs appear, you should be alert.

The incidence of degenerative arthritis in women is higher than in men, with an average of one in four women over the age of 60 suffering from arthritis. What are the causes?

Physiology: Women’s pelvises become wider after childbirth, which puts more pressure on the inside of the knees and makes the joints susceptible to wear and tear.

Exercise habits: Many women don’t exercise regularly, so the ligaments around their knees are not strong enough to protect the joints. In addition, there are some common “knee-injuring activities” in women’s daily lives, such as wearing high heels, which may cause or aggravate the joints’ premature degeneration.

Menstrual effects: The ligaments of women’s joints are most fragile during the first half of the menstrual cycle, making it easier to damage the knees when doing exercises during menstruation.
Four stages of degenerative arthritis

Knee arthritis does not occur silently, so we need to pay attention to our bodies’ signals and not ignore any pain. The aging of the knees is also age-related. Among the elderly people over the age of 80, more than 50 percent have symptoms of degenerative knee arthritis.

There are four stages in the progression of degenerative arthritis. Below are their respective symptoms. 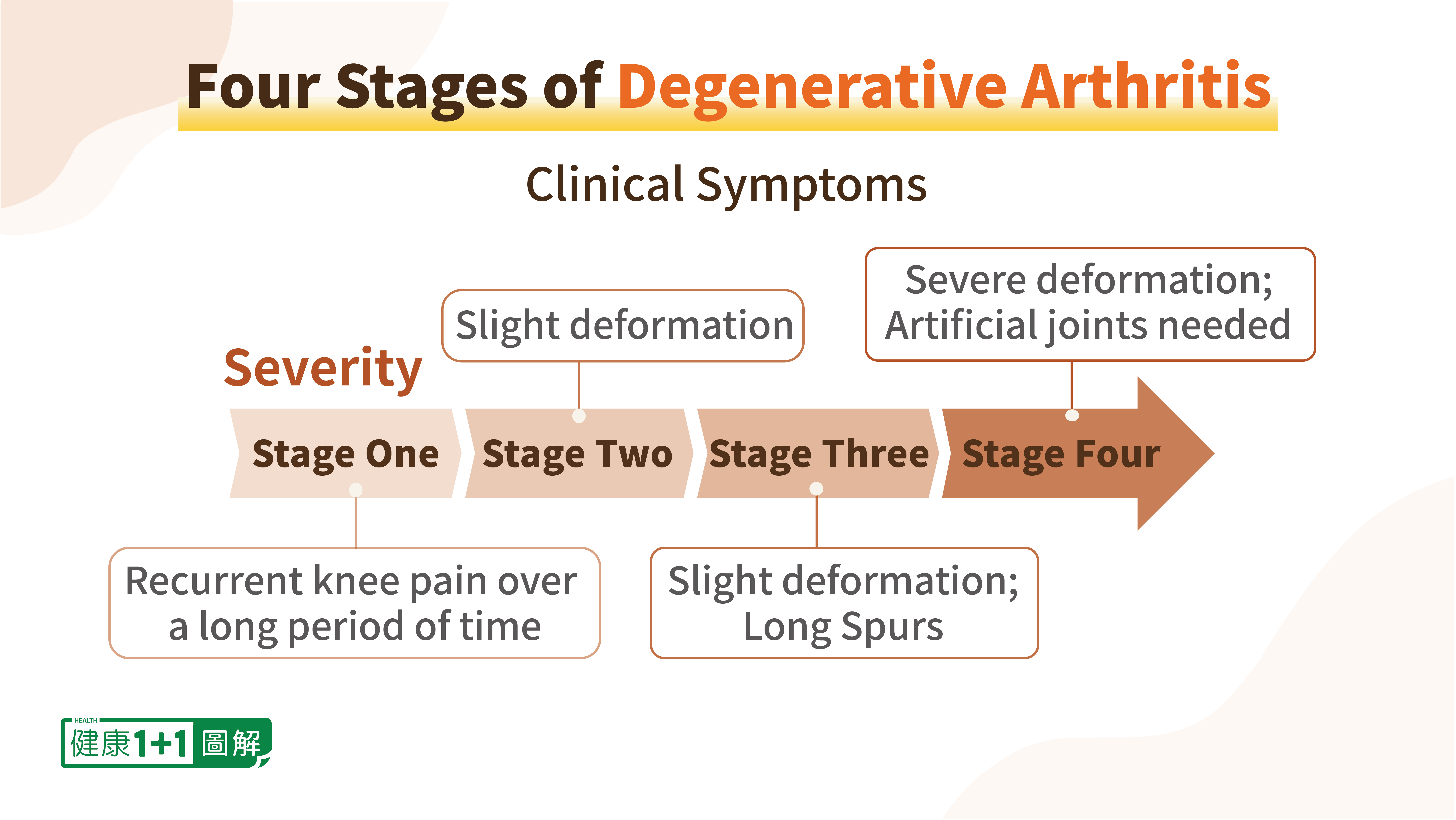 The first phase of degenerative arthritis takes place mainly between the ages of 20 and 40. It is usually characterized by recurrent or persistent knee pain. When an x-ray is taken at this stage, the knee joints will look normal, but there will be some white substances around the knees. And the knee joints’ surface will be slightly rough and has low elasticity. These are the symptoms of mild inflammation of the joint cartilage in the early stages of degenerative arthritis. 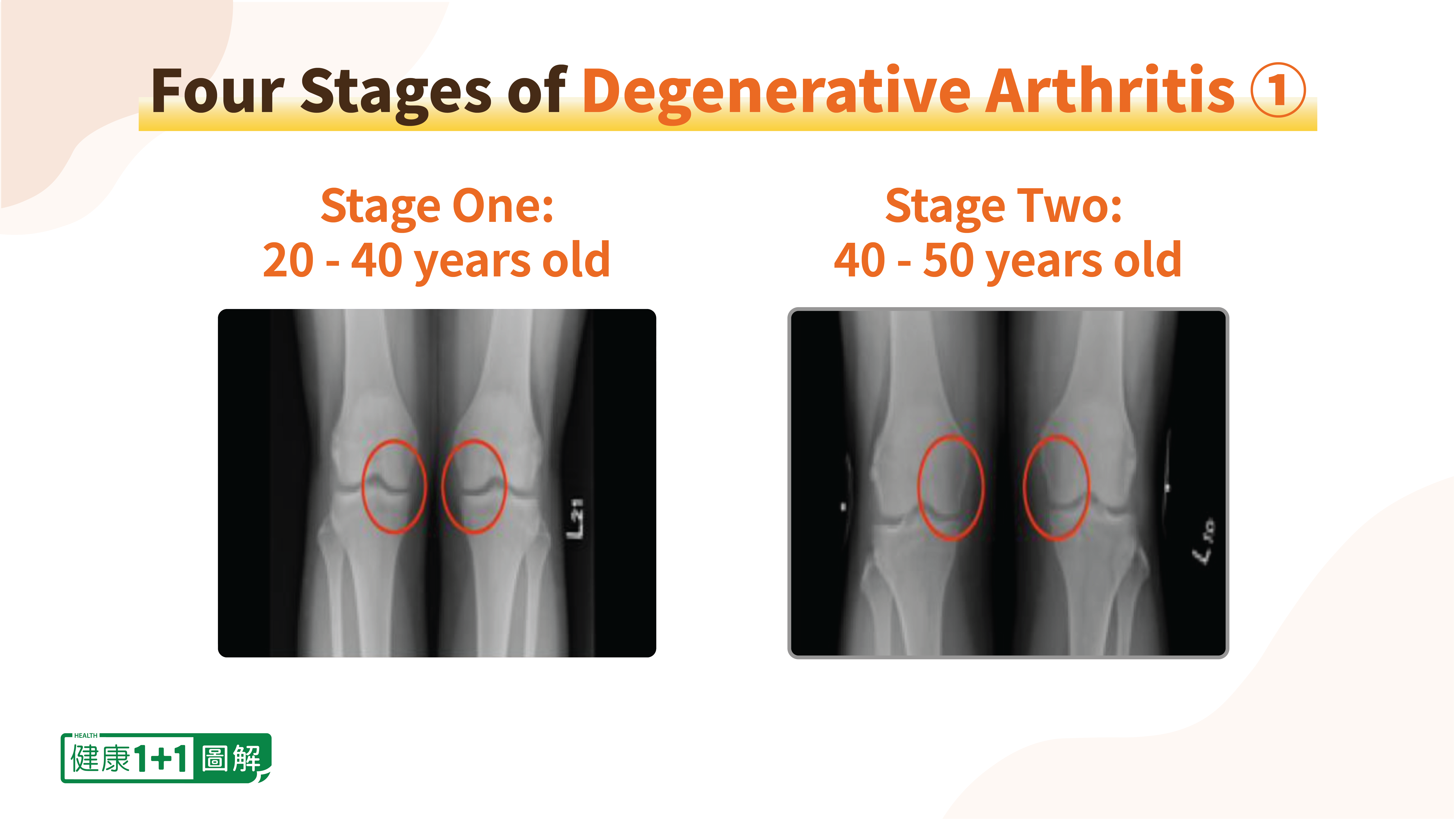 This phrase mainly occurs between the ages of 40 and 50. If knee pain is not treated in a timely manner, people will gradually change their gait to avoid pain, which may lead to the formation of the “O-shaped legs”. Thus, in the second stage, there will be minor knee joint deformation. If the knee joints become swollen, it means that the knee caps have been repeatedly inflamed, and the tissues around the knee caps may have become inflamed and calcified, making it difficult to squat or stand.

Many people, who have X-rays taken at this stage, will notice that the surface of their knee joints has become uneven, the inflamed parts have bulged, and the joint space has started to become narrow.

In the first and second stages of degenerative arthritis, the degeneration is difficult to see on X-rays and can only be seen more clearly with arthroscopy.

The third stage occurs mainly between the ages of 50 and 60. According to traditional Chinese medicine, “the liver governs the tendons, and the kidneys govern the bones”. At this time in life, a person has naturally reached the stage of degeneration, where there is a deficiency of the kidney qi (i.e. vital energy), and the tendons and bones are no longer strong enough. If not properly maintained, the knees will begin to deteriorate and their degree of deformity will develop from mild to moderate. You may also see on x-rays that the bulging parts of the joint cartilage have broken and become hair-like tissues, and some spurs have grown on the bones.

This stage occurs mainly over the age of 60. If degenerative arthritis is not treated in the early stages, the cartilage will gradually crack and break down, exposing the bones. The knee joint space will disappear, and the joints beco 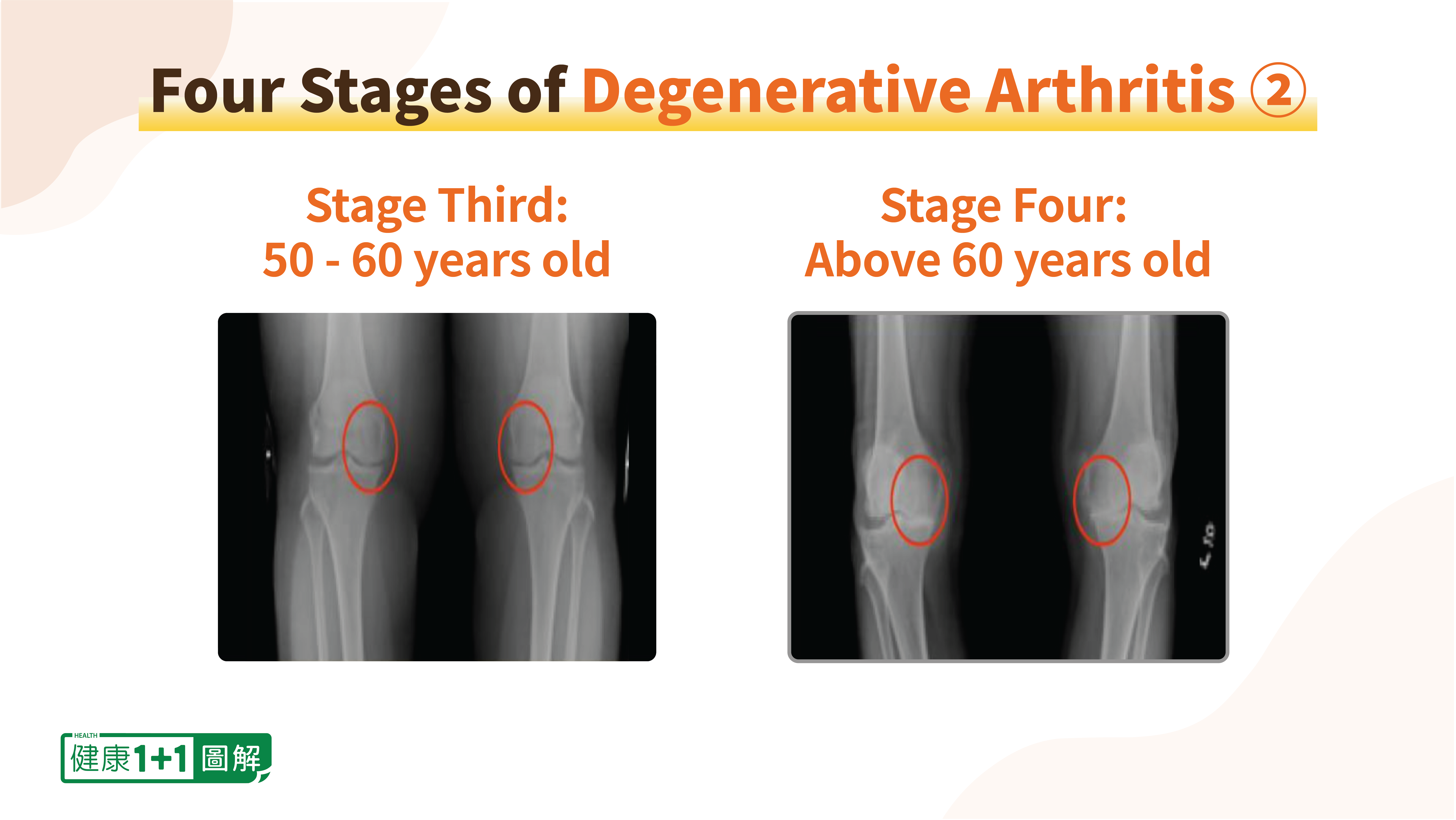 me severely deformed. At this point, it is necessary to replace the joints with artificial ones, which will only be the beginning of rehabilitation. Many patients don’t pay attention to their rehabilitation after the joint replacement, and they will even need a second or third replacement.

Knee health has a huge impact on one’s quality of life. Dr. Guo told us about a 70-year-old gentleman who loves farming, is full of energy, and the head of a large family. Yet, one day, the man’s daughter noticed her father had stopped going outside, and was depressed and even refused to travel with his family.

It turned out that he had developed degenerative arthritis and was suffering pain and swelling in both knees, preventing him from traveling.

After a diagnosis, he received acupuncture twice weekly for three months and took traditional Chinese herbal medication, but Dr. Guo’s primary advice to this man was “going out first, treatment second,” and reminded the man that the point of his treatments was to allow him to continue participating in his active lifestyle. Going outdoors, traveling with his family, and farming as he once did would uplift his mood and be a benefit to his recovery.

After 90 days, his knees improved significantly, to the point where he could climb up and down the stairs with ease. His smile returned, and his family was delighted.

“Saving this elderly gentleman’s knees is actually saving the entire family’s happiness,” said Dr. Guo. “Sometimes the elderly have difficulty talking about their own illnesses because they don’t want to burden their family members. Therefore, family members should pay more attention to the elderly. If they one day appear gloomy and depressed, there may be something causing physical discomfort and pain.”

Movements That Burden the Knees

To better take care of our knees, we need to know which motions create more force around the knees and which movements task them more than others. The only time our knees bear no weight at all is when we are lying down. 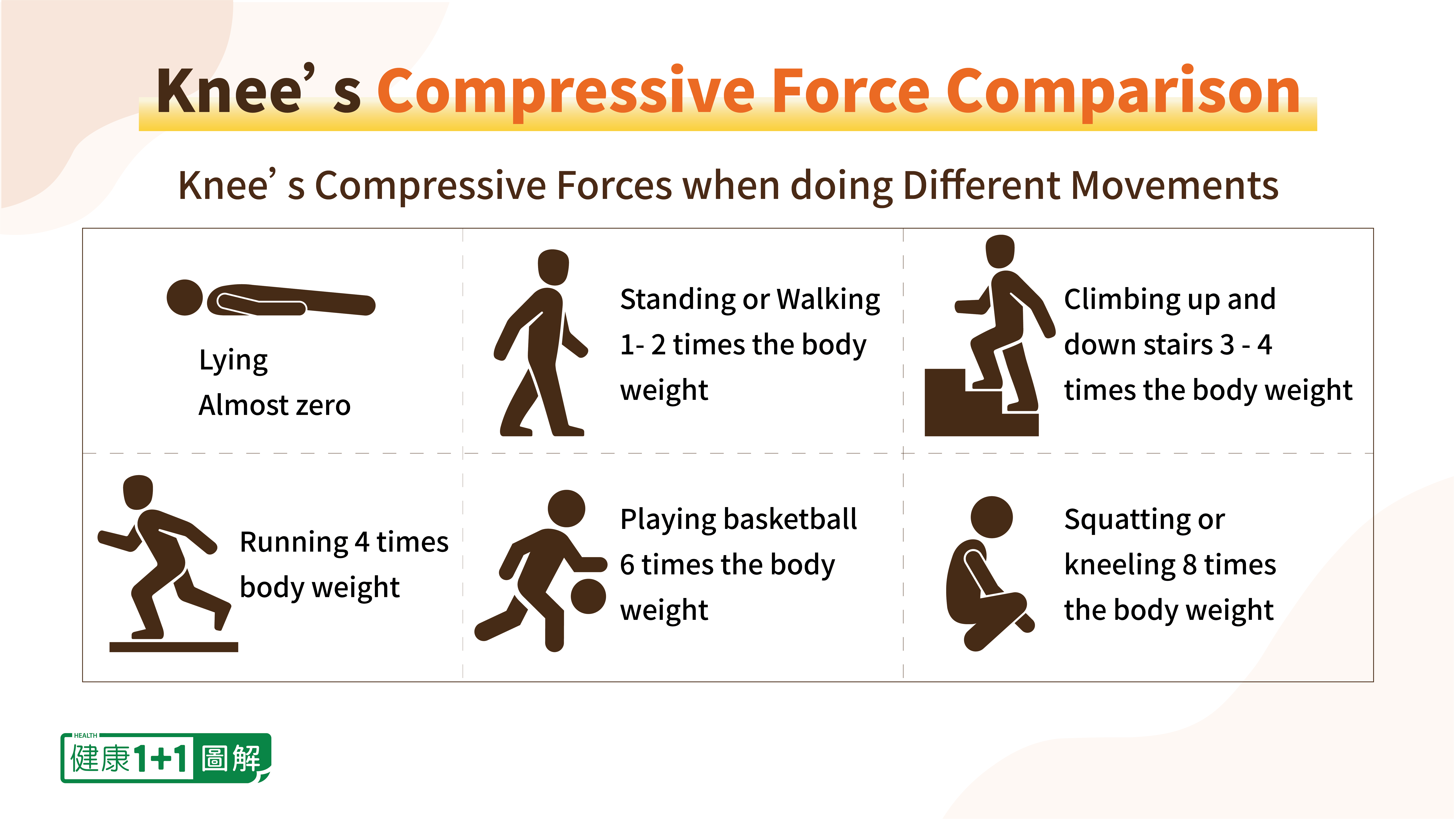 Sitting in a normal chair thus puts less force on one’s knees than sitting on a low stool that forces you into a sort of squat position. Dr. Guo also advised us not to cross one leg over the other while sitting, which adds stress to the knees.

Many people exercise by climbing up and down stairs, running, and playing basketball, and squat or kneel while doing chores like cleaning the floor. These all impact knee health, and need to be offset in healthy ways.

If degenerative arthritis occurs, in addition to receiving treatment and lifestyle changes, there are six simple rehabilitative exercises that can help restore the knee to health by relaxing the thigh muscles or strengthening the leg muscles.

In a standing position, hold on the edge of a chair or bed with one hand. Bend back one knee and raise the calf of the same leg. Use the other hand to grab the ankle and pull the thigh back, so the front side of the thigh will have a tightening feeling. 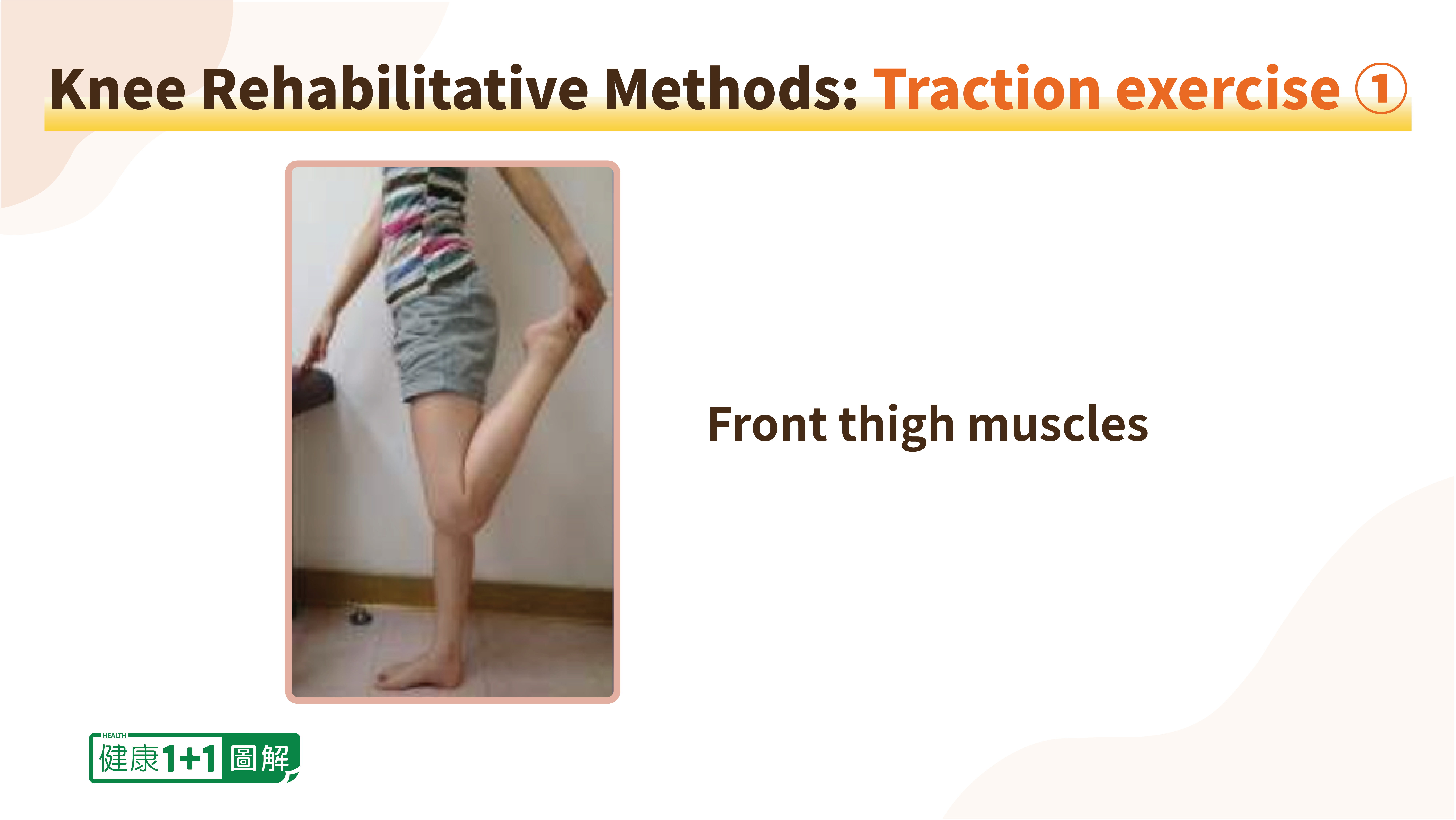 Holding one thigh with both hands while lying down. Then unbend the knee, so that the back of the thigh will have a tight feeling. 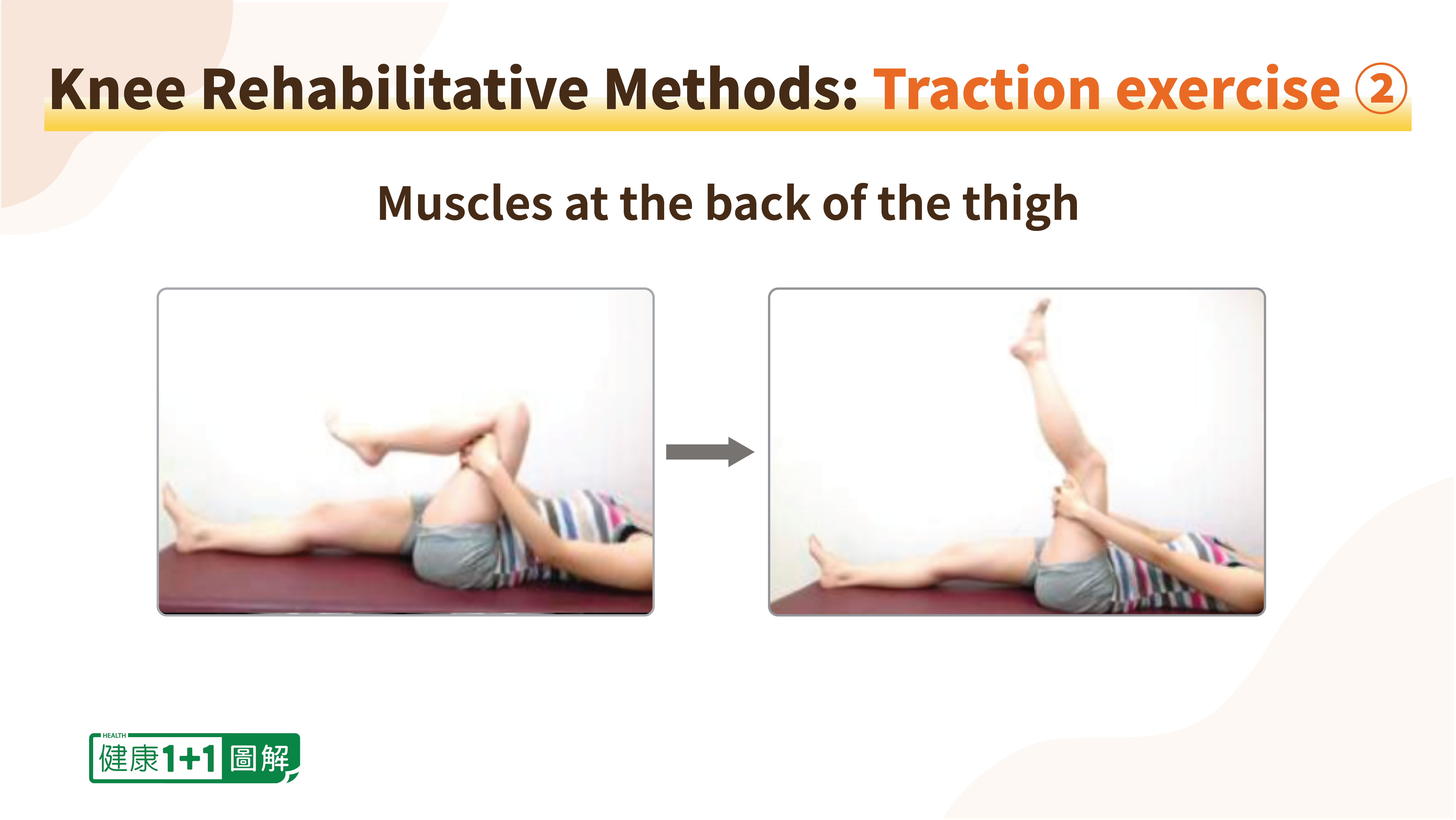 For people who sit for long hours at work, the muscles on the back of their thighs also tend to be tight. This set of traction exercises can help relax these muscles.

If the thigh muscles are strong, they can help reduce the burden on the knees, and movements such as squatting will become more effortless.

Muscle Exercise 1: Back of Thigh

In a prone position, bend one knee and raise it off the bed, and raise the thigh upwards. A towel can be placed under the kneecap to reduce the pressure on the joint. 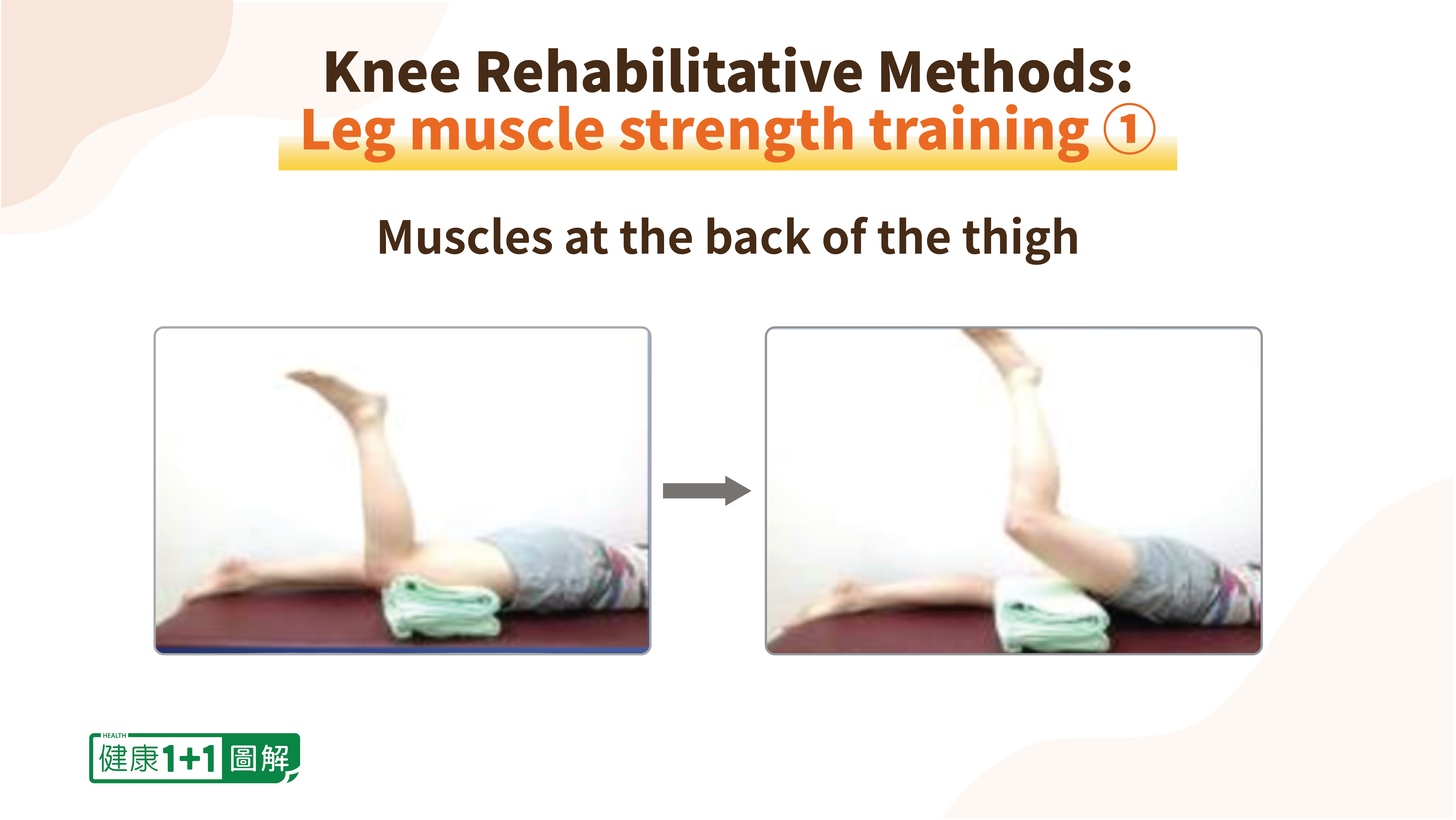 Lie flat on your back with your lower back flat against the bed. Place a roll of towel under your kneecaps. Slightly bend the knees. Straighten one of the knees, so that the heel is raised off the bed. Stay for 5 to 10 seconds and then relax. Repeat several times and then switch feet. 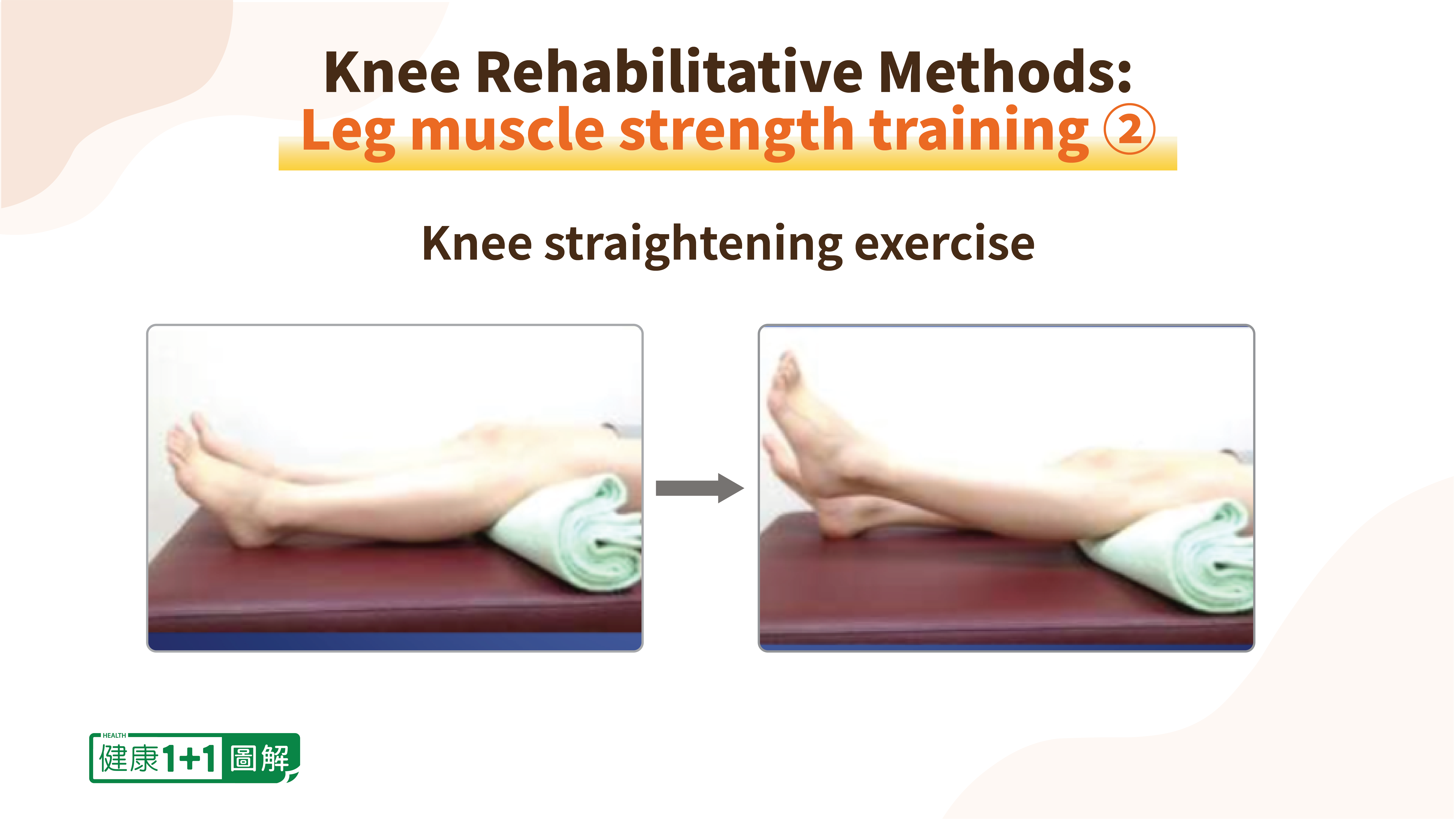 Sit with your back straight and your arms relaxed at your sides. Extend one foot straight, hold for 5 to 10 seconds, and then put it down. Do not hold your breath. Repeat several times and then switch legs.

Lie flat on your back, with a straight back and relaxed arms at the sides of your body. Extend one foot straight, hold for 5 to 10 seconds and then put it down. Do not hold your breath. Repeat several times and then switch legs. 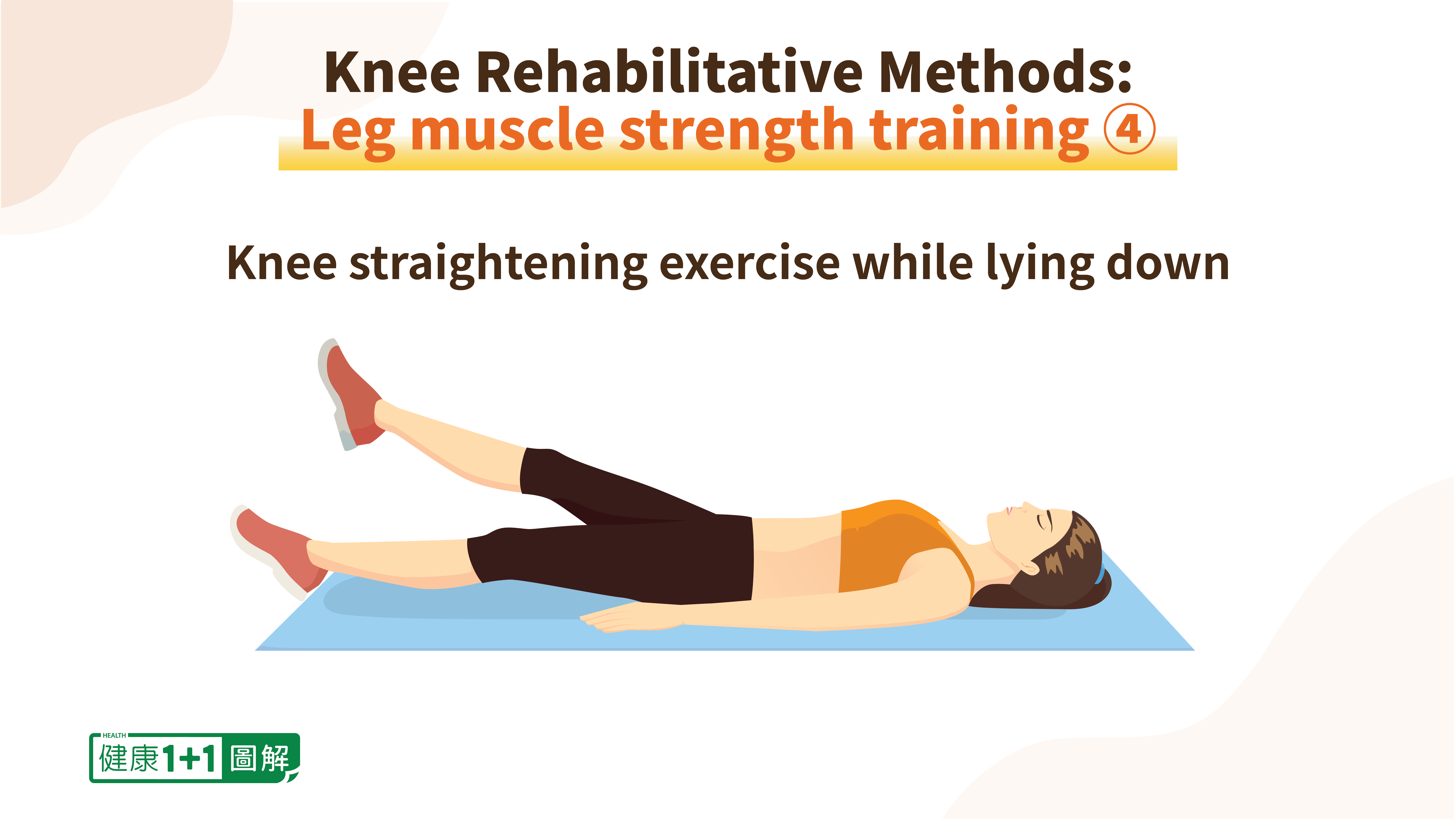 Some people’s degenerative arthritis is caused by a lack of muscles. So we need to make the muscles and ligaments around the knee joints strong, in order to better protect the knees. In addition to exercises, we can also pay attention to our diet.

We should consume foods high in calcium, such as little dried fish and milk, foods containing collagen and chondroitin, such as pig’s feet, hoof tendons, chicken claws, black and white fungi, and yam. There are both animal and plant based proteins and collagen sources.

Regardless of age, we all need to take good care of our joints. All we need to do is spending a little more time to do exercises and keep a balanced diet.